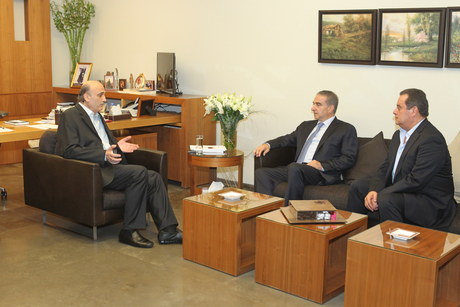 The two-hour meeting tackled the developments of the presidential file, an LF statement said.

“The presidential file is heading towards endorsing the broad agreement on a Christian candidate... The agreement on the nomination of General Michel Aoun that enjoys Christian legitimacy has expanded to become a broader national agreement,” Pharaon said after the talks.

“As for the premiership, everyone realizes that the natural national legitimacy, not only the sectarian one, requires ex-PM Saad Hariri to become the head of the next government, especially that the Aoun-Hariri powersharing would relieve the country, immunize the National Pact and the Constitution, and allow us to address the pending problems regarding state institutions, the economy, the refugees and other issues,” Pharaon, who is close to Hariri's Mustaqbal Movement, added.

Hariri is reportedly on the verge of announcing his official endorsement of Aoun's presidential bid.

Several officials of Speaker Nabih Berri's AMAL Movement have slammed the latest Hariri-Aoun rapprochement as a return to the “1943 bilateral Sunni-Maronite powersharing format.”

Sorry, but Caporal is the worst choice ever. He is a destructor. Historical mistake by Geagea and Hariri.