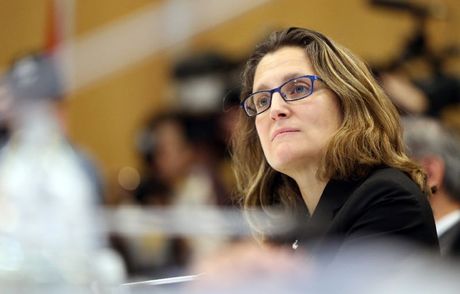 The head of the European parliament and Canada's trade minister held last-ditch talks Saturday aimed at salvaging a trade deal threatened by a Belgian region's refusal to sign on.

EU assembly chief Martin Schulz also planned an 11th-hour huddle with Paul Magnette, head of Wallonia's socialist government which is blocking the agreement between Ottawa and the 28-nation European Union.

The Brussels meetings are aimed at "reviving CETA talks. We can't stop at the last mile," Schulz wrote on Twitter, referring to the agreement's name.

CETA would link the EU market of 500 million people with the world's 10th biggest economy.

"We have done our job, it's now up to the European Union to finish theirs," countered Canada's Chrystia Freeland after the talks with Schulz, adding that she was returning to Toronto on Saturday.

"I really hope that the Europeans can bring it to a conclusion and that I can come back in a few days with my prime minister to sign the agreement," she said, cited by Belgium's Belga news agency.

The accord was initially scheduled to be signed next Thursday with Prime Minister Justin Trudeau in Brussels -- and Schulz said that that date remained in the diary.

"The problems are on the Europeans' table and we have to try to resolve them," he said. "This meeting was very constructive and will perhaps be decisive.

Canada blasted the European Union on Friday as incapable of signing international agreements, as talks to persuade Wallonia to sign up to the huge trade deal broke down.

Freeland's comments fed into warnings that the EU, beset by rising anti-globalisation sentiment, may never be able to land any other deals including one with the United States.

- 'Democracy takes time' -Wallonia's government chief Magnette told AFP on Friday that his Belgian region needed more time but that there was still scope for an agreement.

"Democracy takes a little time, Magnette said. "I wasn't asking for months, but you can't carry out a parliamentary process in two days."

The Walloon parliament earlier this week refused to let the federal Belgian government approve the deal between Canada and the European Union, which needs to be backed by all 28 EU member states.

Belgium has seven elected assemblies: the geographic regions of Wallonia, Flanders and Brussels; the three linguistic communities; as well as a parliament and senate at the federal level.

EU trade commissioner Cecilia Malmstroem said she was still hopeful a deal could be reached.

"We have engaged wholeheartedly with Wallonia the last days. Truly sad talks have been halted. Still hope to find solution in order to sign CETA," the Swede said on Twitter.

The Comprehensive Economic and Trade Agreement (CETA) with Canada is opposed by anti-globalisation groups who say it is a test model to push through an even more controversial EU-US trade deal called TTIP, talks on which have also stalled.

There have been protests against both deals in several cities.

Magnette on Friday pointed in particular to a highly controversial investment protection scheme buried in the deal that has drawn the fury of activists, and which is also involved in TTIP.

Wallonia enjoyed support from activist groups like Greenpeace which charged that the deal risked satisfying "corporate greed" and trampling on people's rights and health standards on both sides of the Atlantic.

British Prime Minister Theresa May on Friday dismissed warnings that the EU-Canada deal raised serious questions about whether London could strike a similar agreement after Brexit.