Harb Urges for Cooperation with New President for Lebanon's Sake 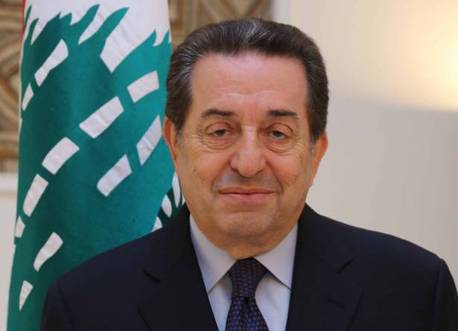 Caretaker Minister of Telecommunications, Butros Harb said on Tuesday that everybody must cooperate with the newly elected president General Michel Aoun for the sake of Lebanon's best interest.

“General Michel Aoun is now president for all the Lebanese and this is how we shall deal with him; it is everybody's duty to cooperate with him for the sake of national interest,” Harb said on Twitter.

“All the previous experiences of a national accord governments have failed. Therefore, I call President Aoun to protect the democratic system, as well as to form a cabinet with a ruling majority alongside an opposition that can hold it accountable,” he added.

“If we are on the opposition side, our opposition will not be aimed at the president of the republic, but we shall cooperate with him. The president is the arbitrator in the political game,” he concluded.

Harb's comments came one day after Aoun was elected president as Lebanon's 13th president with a majority of 83 votes out of 127.

Binding parliamentary consultations for the designation of a new premier have been scheduled for Wednesday and Thursday, hours after Michel Aoun was elected.

Earlier on Monday, Aoun signed a decree accepting the resignation of Prime Minister Tammam Salam's government and asking it to act in caretaker capacity until the formation of a new government.

Aoun's election ends a presidential void that lasted around two and a half years. The FPM founder was tipped to become president after his nomination was formally endorsed by al-Mustaqbal Movement leader ex-PM Saad Hariri earlier this month.

Analysts have warned his election will not be a "magic wand" for Lebanon, which has seen longstanding political divisions exacerbated by the war in neighboring Syria and has struggled to deal with an influx of more than a million Syrian refugees.

The 81-year-old former army chief had long eyed the presidency, and his candidacy was backed from the beginning by Iran-backed Hizbullah, his ally since a surprise rapprochement in 2006.

hahahaha! give up your seat in Batroun if you want to have a chance of talking to President Aoun. You have to go through me ya Butros.

Aah, ya Boutros Harb. You almost became president in 2004 when Rustom Ghazali wanted you President (As described in the released docs of investigation of Hariri assignation, Ghazali speaking to Mr X aka Berri)... Unfortunetly for him, Syria left Lebanon and General Aoun returned.

If you really hoped to cooperate with the President Aoun, you should have voted for him!

" (As described in the released docs of investigation of Hariri assignation, Ghazali speaking to Mr X aka Berri)"

is that the only part you believe is true in the Hariri investigation? I mean the other parts that accuse Hezbollah of assassinating Hariri are not true I bet?

Justin... That was taped phone calls. why don't they mention who mr x is?
The other parts that accuse hezbollah haven't got any direct evidence, just here say and accusations years later during the second part of the investigation following the appointment of the new investigator. Just seamed a little more politized by then. Not to say i dismiss it entirely.

Maybe Harv should be collaborating with the judge investigating the illegal internet network case.

who are the named defendants then in the STL ya troll with less than little brain, the simpsons?