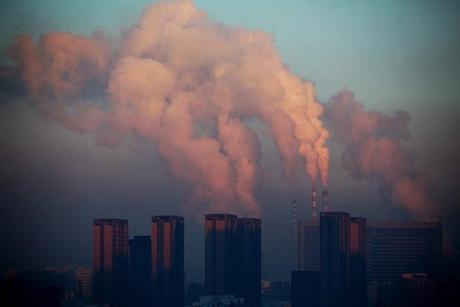 Some 300 million children live with outdoor air so polluted it can cause serious physical damage, including harming their developing brains, the United Nations said in a study released Monday.

Nearly one child in seven around the globe breathes outdoor air that is at least six times dirtier than international guidelines, according to the study by the U.N. Children's Fund, which called air pollution a leading factor in child mortality.

UNICEF published the study, "Clear the Air for Children," a week before the annual U.N. climate-change talks, with the upcoming round to be hosted by Morocco on November 7-18.

The agency, which promotes the rights and well-being of children, is pushing for world leaders to take urgent action to reduce air pollution in their countries.

"Air pollution is a major contributing factor in the deaths of around 600,000 children under five every year, and it threatens the lives and futures of millions more every day," said Anthony Lake, executive director of UNICEF.

"Pollutants don't only harm children's developing lungs. They can actually cross the blood-brain barrier and permanently damage their developing brains and, thus, their futures. No society can afford to ignore air pollution," Lake said.

Toxic air is a drag on economies and societies, and already costs as much as 0.3 percent of global gross domestic product, the broad measure of economic activity, UNICEF said.

Those costs are expected to increase to about one percent of GDP by 2060, it said, as air pollution in many parts of the world worsens.

The air is poisoned by vehicle emissions, fossil fuels, dust, burning waste and other airborne pollutants, it said.

South Asia has the largest number of children living in such areas at about 620 million, followed by Africa with 520 million and the East Asia and Pacific region with 450 million.

The study also looked at indoor air pollution, typically caused by burning coal and wood for cooking and heating.

Together, outdoor and indoor air pollution are directly linked to pneumonia and other respiratory diseases that account for almost one death in 10 in children under the age of five, or nearly 600,000 children, making air pollution a leading danger to children's health, UNICEF said.

The agency noted that children are more susceptible than adults to indoor and outdoor air pollution because their lungs, brains and immune systems are still developing and their respiratory tracts are more permeable.

Children breathe twice as quickly as adults and take in more air relative to their body weight.

The most vulnerable to illnesses caused by air pollution are children living in poverty, who tend to have poorer health and little access to health services.

To combat these noxious effects, UNICEF will call on the world's leaders at the U.N.'s 22nd meeting on climate change in Marrakesh, known as COP22, to take urgent action to better protect children.

"Reducing air pollution is one of the most important things we can do for children," UNICEF said in its report.

At the government level, UNICEF said steps should be taken to reduce fossil-fuel emissions and increase investments in sustainable energy and low-carbon development.

The agency, noting that air quality can fluctuate rapidly, also called for better monitoring of air pollution to help people minimize their exposure.

Children's access to good-quality healthcare needs to be improved and breastfeeding in the child's first six months should be encouraged to help prevent pneumonia.

Lebanon should be on the top of the List of countries with burning of it's collected rubbish full of toxic fumes that's killing Babies & Children & old people .
To stop this process even before gathering the collected rubbish should be the
First Task of our newly elected President before going to Morocco .