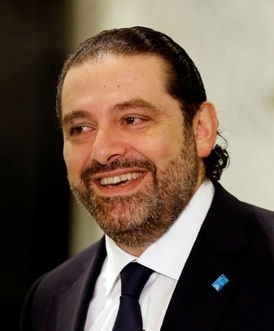 Newly designated Prime Minister Saad Hariri announced after his designation on Thursday that he will begin his national duty with openness to all political blocs even those that abstained from naming him, as he assured that he will form a national unity government.

“President of the Republic General Michel Aoun honored me by asking me to form the government. I accepted, and would like to thank him for his confidence and the confidence of the deputies who honored me with this national assignment. I will be open to all parliamentary blocs, including those who did not name me, in accordance with our constitution and our democratic values,” said Hariri from Baabda Palace.

“On this particular day, we must underscore on the extraordinary effort exerted by Prime Minister Tammam Salam, in a difficult and sensitive phase, to protect the country's unity, legitimacy, institutions, state, coexistence and civil peace in our country,” he added.

“I look forward to starting the consultations to form a national unity government that overcomes political divisions,” he went on to say.

“It is a new term. I have great hope -in this positive moment that ends the suffering of the country and its citizens that lasted for two and a half years of vacancy and paralysis- to form a government quickly, that will work on an electoral law that secures just representation and oversees the completion of the parliamentary elections on schedule,” the PM added.

“It is a new term. I hope to form a government that keeps pace with the new term and enables us all to join efforts to address the socio-economic, economic, environmental, security and political crises suffered by the Lebanese people.”

Hariri concluded as saying: “We owe it to the Lebanese to start working as soon as possible to protect our country from the flames burning around it, to reinforce its immunity in the face of terrorism, to help it deal with the difficulty of the refugees issue, to restore hope and confidence to our young men and women in a better future, and restore the confidence of the Arabs and the world in Lebanon, its message, institutions, economy and tourism and investing in it.

It is a new term, and this is my promise to the Lebanese”.

Speaking to reporters at the Center House in the evening, Hariri noted that Speaker Nabih Berri is “showing cooperation” and President Michel Aoun “wants to make achievements,” calling on all parties to “give the new tenure must a chance.”

“We will cooperate with everyone and we must depend on ourselves to resolve our issues because no one is concerned with our problems,” he added.

I just want to confirm that Hezbollah does not want to marginalize the Sunnis by not naming Hariri for PM. They already said they would not nominate him but that they will also not oppose him. This is not the same when the Sunnis tried but failed to marginalize the Christians at one point in time by not wanting to vote for Aoun. We the Shias can do that because we have weapons and we are the resistance. The Sunnis do not have weapons.
Also, I would like to confirm that I am an atheist spokesperson for Hezbollah.

With Aoun's good looks and Hariri's brains Lebanon will soon become like Switzerland and the best country in the Middle East after Iran.

I know I promised to congratulate Hariri when he becomes prime minister, so here it is: Congratulations Mr. Hariri. I am better than @humble who did not congratulate General Aoun when he was elected president last week.

Eerie Silence on the forum;)!!!

Hariri wants to form a national unity government with these creatures below !!!

"justin 43 minutes ago
a friend of mine sent me this link showing 'lebanese' shia students at the Lebanese University campus pledging allegiance to khamanei !

did you see mowaten of iran upfront holding the microphone and leading the chants?

"libanaisresilient
Hariri will not be appointed for premiership!"

"libanaisresilient
@beiruti and his positivist "analysis"... I'm sorry to inform you but Nashrallah is bluffing and your Dear Fellow Hariri will not be appointed to the premiership."

Being nominated doesn't mean that he will be able to form a Government! Now answer me, What's a PM without a Government? Lol....

Wasn't he nominated before? Did he kept Premiership before? Let's see what happens when he starts going against the President in matters related to disarmament of certain Parties... He will be kicked out of the Post sooner than you expect, Hariri is a lost case!

Arduous or Impossible work? Lol... Will Hariri assume the Post?