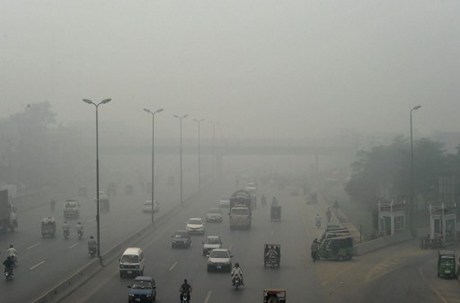 Thousands of citizens of Pakistan's Lahore, one the world's most polluted cities, complained Thursday of breathing difficulties and irritable eyes as a blanket of thick smog was forecast to persist for several days.

Readings of dangerous "fine particulate matter" were more than four times the World Health Organization's recommended level, exceeding 104 micograms per cubic meter of in the worst-hit parts of the city of around 10 million.

Visibility plunged to less than 20 meters and citizens wore face masks to help with breathing.

Nasimur Rehman, a senior official in the Environment Protection Agency blamed the pollution on less-than-average rainfall over the Punjab region, traffic standing still through various points of the city, and tire-burning factories located to the city's north.

The first collision was between two trucks and a bus, accounting for most of the casualties, while the second pile-up involved multiple cars.

Kashif Hussain, a 34-year-old cattle market worker, told AFP: "The smog has been going on since yesterday and I had to take the day off work today because my eyes have gone red.

"It's been very severe and I was prescribed drops by my doctor," he said.

So-called fine particulate matter are particles 2.5 micrometers in diameter or smaller produced by combustion, and some industrial processes. They are linked to eye-irritation, coughing, asthma and even heart attacks as well as premature death.

A United Nations last week reported some 300 million children live with outdoor air so polluted it can cause serious physical damage, with the situation most acute in South Asia.