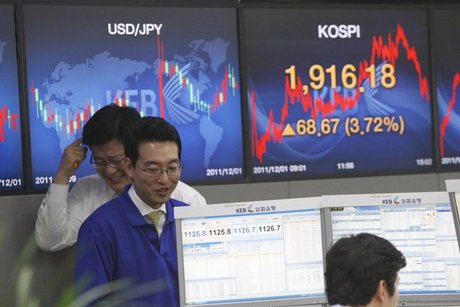 A rally on global markets stalled Thursday as euphoria over major central banks' coordinated cut to borrowing costs wore off and investors sought confirmation that European leaders will next week deliver a long-term solution to the debt crisis.

Markets had jumped on Wednesday when the central banks of Europe, the U.S., Britain, Canada, Japan and Switzerland made it cheaper for banks to borrow dollars, helping them to operate smoothly at a time of tight credit. China's central bank also acted to release money for lending and shore up growth by lowering bank reserve levels for the first time in three years.

Worries about Europe's financial system and the European Central Bank's reluctance to intervene heavily in bond markets have seen borrowing rates rise for European countries in recent weeks. That raised fears of a global credit crunch of the type that plunged the global economy into recession in 2009.

As a result of the central banks' action, commercial banks in the EU and four other countries will now be able pay less to borrow dollars, the currency of international trade.

But analysts said that the decision might only have a short-term effect and does nothing to solve the underlying problem of an enormous government debt in Europe. Investors say the real boost to the markets might come only if European leaders announce a dramatic action at the summit on debt crisis next week.

"Until we see some definitely agreed on and, when necessary, legislated initiatives from Europe, optimism can be premature," said Ric Spooner, chief market analyst at CMC Markets in Sydney. "Until we see that sort of thing, there will be a ceiling on the rally."

European Central Bank chief Mario Draghi on Thursday hinted the bank was ready to play a bigger role in the resolution of Europe's debt crisis, but only after the 17 euro economies align their budgetary policies more closely.

Although the stock rally waned, bonds continued to perform strongly on hopes that European leaders will agree to some new support for weaker states, such as Italy, in exchange for tighter controls over their spending.

Bond yields in the secondary market — where the bonds are traded freely once they are issued — dropped for most eurozone countries. Italy's key 10-year bond yield fell sharply to 6.81 percent from 7.30 percent the day before, a sign that investors are more hopeful it will be able to handle its debts.

The improvements were helped by successful bond auctions in Spain and France. Although Madrid had to pay higher interest rates on its borrowings, demand for its bonds was strong. France saw its borrowing rates drop in a sale of 10-year and 15-year bonds.

The central banks' move sent the Dow Jones industrial average soaring 490 points on Wednesday, or 4.2 percent, its biggest gain since March 2009 and the seventh-largest of all time. The Standard & Poor's 500 closed up 4.3 percent.

Benchmarks in Australia, India, Singapore and Taiwan all rose more than 2 percent. In mainland China, the benchmark Shanghai Composite Index gained 2.3 percent to 2,386.86.

The action late Wednesday by the Chinese central bank signaled a key change in monetary policy and pushed shares of Chinese banks up.

By easing reserve requirements, the Chinese central bank made available some 350 billion yuan ($55 billion) that otherwise would have been locked up in reserves.

In energy trading, benchmark crude for January delivery was up 25 cents to $100.61 a barrel in electronic trading on the New York Mercantile Exchange. The contract rose 57 cents to settle to $100.36 on Wednesday.