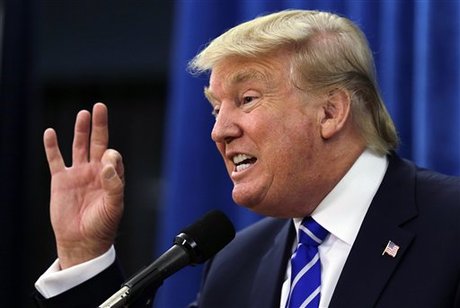 Diplomats gather next week for a fresh round of U.N. climate talks in Morocco, but all eyes will be on the US where presidential elections may determine the planet's future.

Republican nominee Donald Trump, who has described global warming as a "hoax", said in May he would "cancel" the climate-rescue Paris Agreement if elected leader of the free world.

The pact, concluded in the French capital last December after years of haggling, came into force on Friday -- its goal to stave off worst-case-scenario global warming.

Climate scientists and NGOs have long warned of dire consequences if Trump is elected.

On Friday, President Barack Obama warned in an interview with U.S. talk show host Bill Maher that: "All the progress we've made on climate change", among other crux issues, "is going to be on the ballot" next Tuesday.

- Can Trump withdraw the U.S.?

Obama ratified the agreement, giving it a major boost towards the threshold of endorsements required for entry into force.

The cutoff was ratification by 55 of the 197 parties to the U.N.'s climate convention (UNFCCC), representing 55 percent of greenhouse gas emissions.

That having been achieved, it would be cumbersome, but far from impossible, for a country to withdraw from the international treaty.

Trump would have three options.

1) He could withdraw the United States from the 1992 climate convention, the framework within which the deal was negotiated.

According to the terms of the convention, withdrawal would take effect one year after notification, and any departing state "shall be considered as also having withdrawn from any protocol", such as the Paris Agreement.

2) The agreement itself makes provision for parties to withdraw, but notice can only be given three years after Friday's entry into force. The actual withdrawal would take effect a year later.

Because an executive decision, rather than a vote in the Senate, led to U.S. accession, "a Trump administration could simply withdraw", said international relations associate professor Robert Falkner of the London School of Economics.

3) Trump could abandon or ignore the US' national emissions reduction targets, which contribute to the overall international effort. Analysts say this is his most likely course of action.

- Can the agreement survive without the U.S.?

Trump's threats, if carried out, would recast the United States in the role of climate villain.

The Obama administration has been an ardent champion of the Paris Agreement, a role Trump's Democratic rival, Hillary Clinton, has vowed to continue.

Washington and Beijing played a key role in helping break the deadlock between negotiating parties in the tense lead-up to last year's make-or-break Paris conference.

Obama then beat the drum for the deal's rapid, pre-election, ratification.

By Saturday, it had been ratified by 97 parties representing 67.5 percent of emissions, meaning that without the U.S., it would fall just short of the 55 percent emissions threshold.

At the rate by which countries are signing up, however, it is likely to pass that critical point before year-end, observers say.

The agreement is mum on the legal ramifications of countries withdrawing. Legal experts told AFP this means there are none, and that the binding pact remains in force no matter what happens.

A U.S. withdrawal from the hard-won agreement will likely be more of a moral and diplomatic blow than a legal one.

"Not everyone is on board yet, things are still delicate, busy settling into place... there hasn't been enough time for it to become irreversible" said Teresa Ribera, director of the Institute for Sustainable Development and International Relations in Paris.

A U.S. departure would be the perfect excuse for other doubters to back off.

"I see the real danger of Trump being elected as jeopardising the enormous change in the psychology on climate change," said Louise van Schaik, an expert in multilateral negotiations at the Clingendael Institute in the Netherlands.

Nearly 400 scientists, including a Nobel laureate, slammed the Republican in an open letter in September for promising a "Parexit" they said would have severe and long-lasting consequences.

"If the U.S. were to pull out, it would be a foreign policy problem," she told AFP.