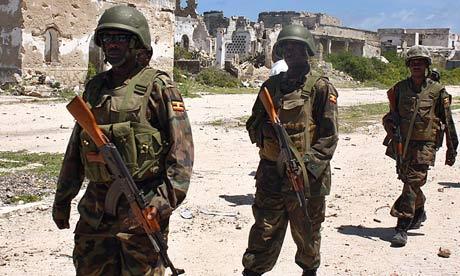 At least 25 soldiers died in weekend fighting between rival Puntland and Galmudug regional forces in the divided Somali town of Galkayo, military officials on both sides said Monday.

"We have lost 12 men and there are more than 10 wounded," said Puntland commander Jumale Jama Takar, while his Galmudug counterpart Abdirahman Qoje said: "We have lost 13 soldiers and nearly 20 others wounded."

The commanders blamed each other for starting the fight.

The disputed town, about 700 kilometers (440 miles) northeast of the capital Mogadishu, has seen repeated clashes in recent weeks.

However Sunday's fighting is the deadliest yet and marked the collapse of a short-lived peace agreement between the two semi-autonomous Somali states.

The northern quarters of Galkayo are controlled by Puntland authorities while the south is under the authority of the Galmudug regional state.

It is the capital of Somalia's divided Mudug region, the scene of frequent fighting between the Puntland and Galmudug forces over contested areas.

The town, one of the most developed in the region, is also divided along ethnic lines with the northern part populated mainly by the Majeerteen, a Darod clan, and the south primarily by the Sa'ad Habar Gidir, a Hawiye clan.

In September, the U.S. was drawn into the rivalry when Galmudug authorities accused Puntland of duping U.S. forces into carrying out an air strike on its soldiers, killing 13.

Residents said the toll from the weekend clashes may be higher than the rival parties admit and included civilians as well as soldiers.

"We are asking both sides to show restraint and stop the war," said Mohamed Farah, a traditional elder in the city.

"Yesterday alone 35 people have been killed and more than 100 others wounded. Most of those killed are the combatants but there (are) also civilian casualties on both sides of Galkayo."

Another resident, Bile Abdulahi, said there was no fighting on Monday but added that Galkayo remained tense.

"There are still some dead bodies strewn around the contested area. Fighting can resume anytime," he said.

In December 2015, at least 20 people were killed and 120 wounded in Galkayo in violence between rival militia groups from Puntland and Galmudug that forced more than 90,000 people to flee.

Somalia is in the process of selecting a new parliament, upper house and president in a limited franchise election that involves 14,000 delegates from all regional states --  including Galmudug and Puntland.

Political tensions have been rising and threats from the al-Qaida-linked Shabaab militants have increased in the run-up to the delayed vote, originally due in August.

The Shabaab has fought to overthrow the internationally-backed government in Mogadishu since 2007, losing control of the capital in 2011 before losing other bastions.

But the U.N. last week warned that the Shabaab were still capable of launching large-scale attacks despite claims that they were weakening after the deaths of at least three senior leaders in a series of drone strikes.

"Contrary to prevailing narratives of successful counter-insurgency and counter-terrorism efforts, the monitoring group assesses that the security situation has not improved in Somalia," a report by United Nations sanctions monitors said.