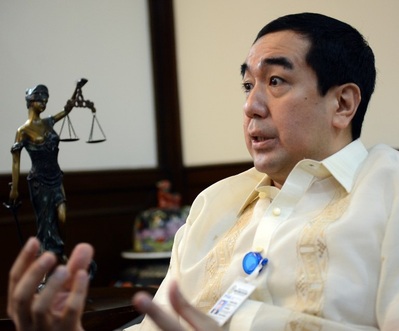 Ex-Philippine dictator Ferdinand Marcos can be given a hero's burial, the Supreme Court decided Tuesday in a hugely controversial ruling which critics said would whitewash his crimes and divide the nation.

The justices overwhelmingly endorsed President Rodrigo Duterte's decision to allow the burial at the "Cemetery of Heroes" in Manila, three decades after a famous "People Power" revolt forced Marcos into U.S. exile and restored democracy.

"There is no law that prohibits the burial," court spokesman Theodore Te said as he read a summary of the judgment.

Hundreds of Marcos supporters outside the Supreme Court cheered. But opponents who had petitioned the court to reject the plan staged a rally nearby and voiced deep anger.

"It's really sad because the decision makes liars out of human rights victims," Neri Colmenares, who as a student leader was tortured by Marcos' security forces during martial law, told AFP outside the court.

Marcos ruled the Philippines for two decades until key military figures turned on him and millions took to the streets in the "People Power" uprising, a largely peaceful event that inspired democracy movements throughout Asia and around the world.

Marcos, his infamously flamboyant wife Imelda, and their cronies plundered up to $10 billion from state coffers during his rule, according to government investigators and historians.

The dictator also oversaw widespread human rights abuses to maintain his control of the country and enable his plundering, with thousands of people killed and tortured, previous Philippine governments said.

Anti-corruption watchdog Transparency International in 2004 named Marcos the second most corrupt leader of all time, behind Indonesian dictator Suharto.

After Marcos died in Hawaii in 1989, his family began a successful political comeback and tried repeatedly to have him buried at the heroes' cemetery, where other presidents and celebrated military figures are interred.

Imelda became a congresswoman and fended off all corruption charges against her.

Two of her children established themselves as influential politicians. Ferdinand "Bongbong" Marcos Jnr, was the more successful, becoming a senator before almost winning the vice presidency this year.

However previous presidents had refused to allow the burial in the heroes' cemetery because of Marcos' crimes, so the family kept the preserved body in a glass casket at his home in the northern province of Ilocos Norte.

The family's fortunes changed with the election of Duterte, a longtime ally of the Marcos family, as president in May this year.

He said Marcos deserved to be buried at the heroes' cemetery based on the fact he had been a president and a veteran of World War II.

Duterte also said he owed loyalty to the family because his father served in the Marcos government and the family had helped fund his election campaign.

Immediately celebrating the verdict, Bongbong Marcos said the nation of 100 million people would now be able to put past controversies behind it.

"It is in our belief a very important step for the healing process in the political arena of our country," Marcos told CNN Philippines.

He said there was no date yet for the burial but all the preparations had already been made. Opponents said they would ask the court to reconsider, a move unlikely to succeed but which could delay proceedings.

Marcos Jnr's expectations of unity were met with howls of protest from Marcos critics, some of whom held rallies on Tuesday night.

"The decision intends to effectively wipe the Marcos slate clean and negates the sacrifices of the thousands of brave souls who fought and suffered under the brutal Marcos dictatorship," Senator Risa Hontiveros said.