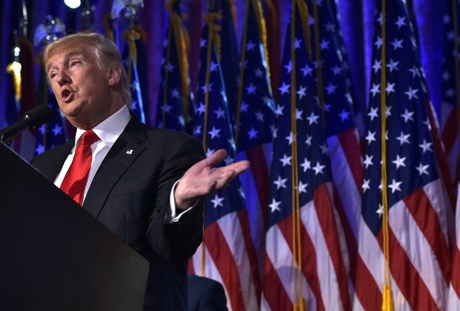 Donald Trump's surprise victory in the US presidential race raises new questions over Federal Reserve policy in the short run and the central bank's vital operational independence over the longer term.

How his proposed, dramatic policy shifts impact the economy could influence Fed plans to resume raising interest rates after a year's hiatus, which was widely expected to begin in December.

Meanwhile, Trump's sharp attacks on the Fed and especially Chair Janet Yellen during the campaign, some worry, could lead to greater political interference in monetary policy.

"We are in a big, fat, ugly bubble. And we have a Fed that's doing political things, this Janet Yellen of the Fed," Trump charged during the campaign.

"The day (President Barack) Obama goes out ... to the golf course for the rest of his life to play golf, when they raise interest rates, you are going to see some very bad things happen," he said.

In fact, the Fed has been hinting at raising rates for months and prior to the election most expectations were that it would do so in its December policy meeting.

But that was when Democrat Hillary Clinton, who espoused continuity in economic policy, was expected to win Tuesday.

With the Trump victory, some analysts say a rate increase could again be off the table.

"As of right now, the chance of a December hike probably is no more than one in three," said Ian Shepherdson of Pantheon Macroeconomics.

Paul Ashworth, of Capitol Economics, however said it depends on how the markets generally respond to Trump's election.

If the markets turn negative and stay there, he said, "the Fed will hold off in December."

- Yellen's future in play? -Yellen has steadfastly insisted that monetary policy moves are not influenced by politics, and she bristled at Trump's accusations.

Some say the combination of continued economic momentum, and the need to show independence from Trump, could in fact support a rate increase at the December 13-14 policy meeting.

Trump's announced economic policies, including spending big on infrastructure projects, tax cuts, and protectionist moves on trade, could add to inflationary pressure that would further support a Fed hike, according to Fed specialist Tim Duy.

"There is going to be some concern that this next presidency will have a powerful fiscal stimulus," he said. "A forward-looking central bank should be considering that and considering raising interest rates."

Even so, Trump's populist, interventionist declarations have shaken the market's confidence in the Fed's ability to protect its independence.

For two years Republicans in Congress have repeatedly attacked Yellen for not following their policy guidance, their views on bank regulations, and for not being transparent over the inner workings of the central bank.

"Republicans in Congress have been wanting to change rules and bring the Fed under greater political control for a long time," said Simon Johnson, an economist at the Massachusetts Institute of Technology.

"And I think that is what Trump is going to want to do also."

Yellen will have just over one year left in her four-year term as Fed Chair when Trump takes office in late January. The president can renew the term of the Fed chair, but Trump might want to replace her.

Joseph Gagnon, a former Fed official now at the Peterson Institute for International Economics, said he doubts Yellen would just resign once Trump takes office. Instead, she would finish her official term.

"He gets to make a replacement in one year," he said.