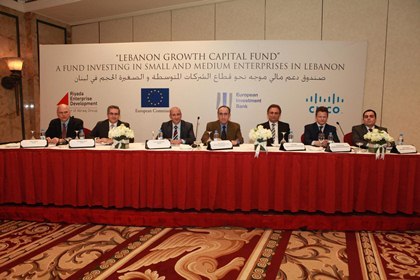 Under the patronage of Prime Minister Najib Miqati, Cisco, the European Investment Bank (EIB), and Riyada Enterprise Development (a member of the Abraaj group) jointly announced Thursday the launch of the US$ 50 million Lebanon Growth Capital Fund which will provide long-term capital and institutional support to small and medium enterprises (SMEs) in Lebanon.

The announcement was made at a high-profile ceremony in Beirut attended by the business community, investors, government, entrepreneurs and the media.

The Fund will target investments in 13-15 businesses that will be expected to achieve a transformational quantum of growth with the potential to expand into new regional and international markets. This will enable Lebanese SMEs from all sectors, through the Fund’s capital infusion and active business support, to grow into leading firms in their markets, resulting in substantial job creation, innovation and long-term economic development in Lebanon.

As part of its commitment under the ‘Partnership for Lebanon’ program, Cisco announced that it will invest US$ 7 million in the Lebanon Growth Capital Fund. Cisco’s role in the ‘Partnership for Lebanon’ is part of a holistic set of Corporate Social Responsibility engagements that Cisco has undertaken since 2006 when Chairman and CEO, John Chambers, visited Lebanon and committed resources and company core competence to help advance the country’s ICT infrastructure, create opportunities for small and medium businesses, and empower the younger generation.

EIB announced that it will invest US$ 6.75 million in the Lebanon Growth Capital Fund, further extending its successful collaboration with Abraaj Capital to support SME’s in the region. With Cisco, EIB, and Abraaj Capital serving as the anchor investors in the Fund, a strong first close of US$ 30 million was achieved demonstrating the high level of investors’ confidence in this Fund, the Lebanese economy, and small and medium enterprises.

The RED platform operates at both a regional and country-specific level with investment teams on-the-ground in eight MENA countries, providing economies of scale and the ability to facilitate geographic expansion of its partner companies. Investments by the Fund will be handled by RED’s dedicated investment team in Beirut and supported by the broader RED platform.

Speaking at the launch, Minister of Economy Nicolas Nahhas said, “The Ministry of Economy and Trade, as well as the Lebanese government as a whole, consider SMEs to be a crucial part of the economy and a vital catalyst to growth and development. By developing a structured approach to support SMEs through multiple initiatives, the government is playing an important role in the growth and development of SMEs.”

“We welcome the launch of the Lebanon Growth Capital Fund which is a clear demonstration of the commitment from the private sector to foster innovation and long-term economic development in the country”.

European Investment Bank Vice President Philippe de Fontaine Vive said, “EIB’s investment in the Lebanon Growth Capital Fund demonstrates the Bank’s continued active support for small businesses in Lebanon. We are delighted to continue our partnership with Abraaj Capital in order to help provide the finance and hands on expertise for these companies to grow.”

Announcing the launch of the Fund, Tom Speechley, Senior Partner Abraaj Capital and Chief Executive Officer, RED said, “We are very pleased to announce the launch and strong first close of the Lebanon Growth Capital Fund, which will provide small and medium businesses in Lebanon with the capital and expertise they need to compete on a regional and international level. We have been looking at the Lebanese market up-close for the last two years in preparation for the launch of this Fund and are confident in our ability to deploy the capital into high growth well-run businesses. We will be announcing the first investment by the Fund shortly and have a very strong pipeline.”

He added: “The entire Abraaj and RED platforms are behind our increasing activities in Lebanon and we believe the combination of a dedicated Lebanese team on-the-ground supported by our regional platform offers a unique proposition for investors in the Fund. The intention is to accelerate the growth plans of high potential Lebanese entrepreneurs and companies not only in the domestic Lebanese market but beyond that to the entire region.”

While the Fund is industry agnostic and will maintain sector concentration limits, specific industries that are of interest include information technology, media, healthcare, and services (including F&B). The Fund will focus on companies where there is a demonstrated technology angle or opportunity to leverage technology to support the core business and up to 40% of the Fund will be allocated for these types of investment opportunities.