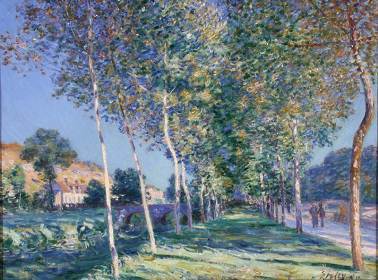 A French court on Friday convicted five men arrested in an FBI sting after stealing paintings by Monet, Sisley and Brueghel and sentenced them to between two and nine years in prison.

The thieves, who pulled off the brazen heist in 2007 at the Musee des Beaux-Arts Jules Cheret in Nice, had claimed they were enticed by the FBI to commit the crime.

Their three accomplices were sentenced to two, three and four years in prison.

Prosecutor Marc Gouton had urged the court to ignore their claim of having been entrapped, saying: "At no time were their hands being held when they planned or committed the hold-up or when they negotiated the sale of the paintings."

The works, valued at 20 million euros ($27 million), were seized in a raid that saw the thieves threaten staff, stuff the paintings into bags and escape in under five minutes.

The five admitted at the trial in southern France to having carried out the robbery but denied accusations from museum staff that they were armed.

The paintings -- "Cliffs near Dieppe" by Claude Monet; "The Lane of Poplars at Moret" by Alfred Sisley; and "Allegory of Water" and "Allegory of Earth" by Jan Brueghel the Elder -- were recovered in a sting organized by the FBI and French police in June 2008.

The paintings were stolen on the orders of a French citizen living in Florida, Bernard Jean Ternus, who pleaded guilty in a U.S. court in 2008 to conspiring to sell the art works. He was sentenced to five years and two months in prison.

Ternus told the thieves he had buyers lined up to pay three million euros for the paintings, which because of their fame would have been difficult to unload on the black market.

Ternus arranged for the thieves to meet the buyers in the southern French port city of Marseille but was unaware that he had been dealing with undercover French police and FBI agents reportedly working for Wittman.

The five were arrested after finalizing the deal and Ternus was detained in Florida.