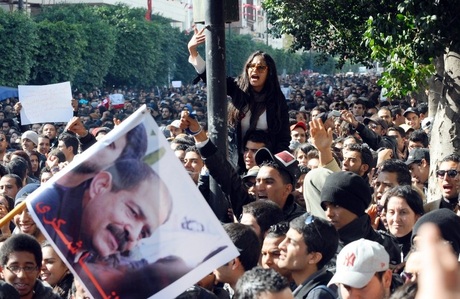 A Tunisian court has sentenced 11 people to 14 years in prison over a 2013 protest during which a police station was set on fire, a court official said Thursday.

The protest in the northern city of Kelibia followed the killing of prominent opposition figure Chokri Belaid.

The demonstrators, now aged between 21 and 28, were convicted of arson, taking part in an armed rebellion and "violent assault on an official", court official Rihab Mhadhbi told AFP.

She said they had been convicted in October but the verdict was not made public at the time.

The sentences were "very harsh", said Nabil Mtaallah of the Tunisian League of Human Rights, which has been following the case since 2013.

Mtaallah said some were convicted solely on the basis of photographs of them in front of the police station, one holding a stone. Another appeared holding a police hat, and was convicted of theft.

The 11 demonstrators deny the charges and are planning to appeal, one of their lawyers, Anis Zine, said.

The killing on February 6, 2013 of Belaid -- a lawyer, Marxist activist and fierce critic of then-ruling Islamist party Ennahdha -- shocked the North African nation.

His murder in front of his home in Tunis triggered large demonstrations across the country, which is seen as a rare success story of the Arab Spring regional uprisings.

Belaid's killing -- like that of leftist MP Mohamed Brahmi in July the same year -- was later claimed by the Islamic State group.