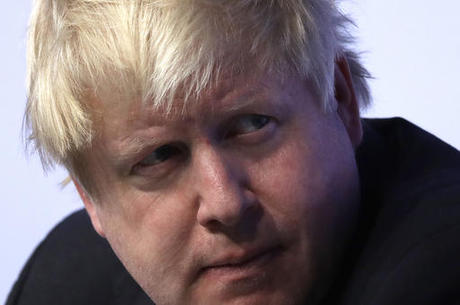 "I really think that it's a mistake to think whatever happens in Aleppo and other areas of rebel-held Syria could amount to a victory for Assad or for Putin," Johnson told the BBC.

The advance of President Bashar Assad's forces in the key Syrian city has sparked international outrage, with hundreds of civilians killed and tens of thousands fleeing since the latest offensive began in mid-November.

Syria's army pushed further into eastern Aleppo Saturday in a devastating assault that has placed it in control of more than half the former rebel stronghold.

Asked if the gains could represent a win for Assad, Johnson replied: "Winning, what is he going to win?"

"It's impossible to imagine that the people of Syria, millions of them, are going to be reconciled to an Assad-led regime.

"There are millions of Syrians who won't accept that outcome, who will continue to fight, so the best outcome is for President (Vladimir) Putin and the puppets that he supports to get to the negotiating table and do a deal that moves Syria away from the Assad regime."

The government has recaptured around 60 percent of eastern parts of Aleppo that rebel forces seized in mid-2012, according to the Syrian Observatory for Human Rights.

"There are millions of Syrians who won't accept that outcome, who will continue to fight, so the best outcome is for President (Vladimir) Putin and the puppets that he supports to get to the negotiating table and do a deal that moves Syria away from the Assad regime."

lol the awakening is rough and some are still in denial. whether or not western imperialists want to call it a victory for assad or putin doesnt matter, what matters is that their terrorist cronies are being exterminated. good riddance.

He just got hit by the Assad curse, expect this guy to leave or be fired from Office soon enough.
By the way, just for the record remember.

Everytime Human Rights Watch, Amnesty or the West in particular whines about Putin and Assad killing the Syrian people and not being able to win, means that it is quite the opposite and the Salafi vermins this British imbecile love so much are getting perished beyond recognition.

hezbis and assad find victory in killing women and children and bombing the people they are supposed to protect ...

i wonder what hezbis would say if the lebanese gvt bombs dahieh or tripoli and calls for foreign planes to shell it accusing dahieh or tripoli of sheltering terrorists.... sure they would agree as they agree on assad doing it on his own people...

if dahieh or tripoli were invaded by terrorists torturing starving and killing civilians and the civilians demanded help from the government, it would be a crime for it not to intervene.

sure by bombing indiscriminately killing civilians by the hundreds, trademark of putin and assad, blow everything to the ground as long as they oppose the regime or refuse to leave their homes... what a hezbi criminal logic...

oh! but you believe children are terrorists too i forgot... like those tortured by assad at the beginning of the revolution for tagging anti assad graffitis... with your full approval of course

lol cool story bro! let me guess, you heard it on fuxnews?

sure like all the tortures and killings of lebanese who were anti assad, also a lie moo hek? it never happened... pityful fanatic you are mooowaten... laughable

sure what are a few women and children deaths as long as they kill terrorists... nothing to you hezbi lovers... "kill them all, god will recognize his own", nothing new since the middle ages moo hek FPM cave man?

Lol, this guy is descended from an Ottoman Turk, no joke.