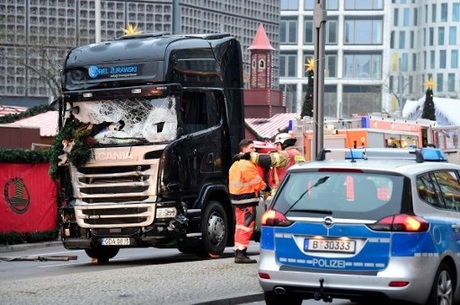 The Islamic State group on Tuesday claimed responsibility for a truck rampage through a Berlin Christmas market that killed 12 people, as German police hunted for the attacker.

"A soldier of the Islamic State carried out the Berlin operation in response to appeals to target citizens of coalition countries," the IS-linked Amaq news agency said, without identifying the perpetrator.

The claim came shortly after German prosecutors, saying they lacked evidence, released a Pakistani asylum seeker who was the sole suspect in the case, sparking fears of a killer at large.

"We can't rule out that the perpetrator is on the run," Interior Minister Thomas de Maiziere told broadcaster ZDF, adding he was confident there would be "progress" in the inquiry.

The Pakistani was arrested late Monday after he was reportedly seen jumping out of the truck and fleeing the scene.

But officials had expressed growing doubts over whether they had the right suspect in custody.

Berlin's police chief Klaus Kandt earlier warned that "we may have a dangerous criminal in the area", and announced security would be boosted while urging "heightened vigilance".

Federal prosecutors said they had found nothing to link the Pakistani suspect to Germany's deadliest attack in recent memory.

"The forensic tests carried out so far did not provide evidence of the accused's presence during the crimes in the cab of the lorry," the prosecutor's office said.

As attention switched to the manhunt, investigators asked the public to send them any photos and video footage.

Twelve people were killed when the truck tore through the crowd, smashing wooden stalls and crushing victims, in scenes reminiscent of July's deadly attack in the French Riviera city of Nice.

Another 48 people were injured, 24 of whom were released from hospital by late Tuesday.

The mangled truck came to a halt with its windscreen smashed, a trail of destruction and screaming victims in its wake, with Christmas trees toppled on their side.

Chancellor Angela Merkel -- who visited the scene of the carnage for a minute's silence and then joined a memorial service in the adjacent Kaiser Wilhelm Memorial Church -- labeled the deadly rampage a likely "terrorist" attack.

The Polish-registered vehicle, which was loaded with steel beams, had cut a bloody swathe of 60-80 meters (yards) into the market in the once-divided city's inner west.

At least six of those killed were German citizens, authorities said, while countries from Israel to Spain said their nationals were among those injured in the busy tourist spot.

A Polish man, killed with a gunshot, was found on the truck's passenger seat, said de Maiziere. He was believed to be the vehicle's registered driver.

The Polish owner of the lorry, Ariel Zurawski, confirmed Monday that the driver -- his 37-year-old cousin -- was missing, telling AFP: "We don't know what happened to him... I've known him since I was a kid. I can vouch for him."

Survivors recounted harrowing stories of near misses and carnage as festive partying turned to death and destruction in seconds.

German flags flew at half-mast and mourners placed flowers and candles at the site.

Berlin's landmark Brandenburg Gate was lit in the German national colours in honour of the victims.

The government declared that the city's 60-odd Christmas markets -- after a one-day voluntary stoppage out of respect for the victims -- should continue because "we must not let our free way of life be taken from us."

Europe has been on high alert for most of 2016, with bloody jihadist attacks striking Paris and Brussels.

Germany also suffered two attacks in July in the southern state of Bavaria committed by asylum seekers and claimed by the Islamic State group.

An ax rampage by an Afghan or Pakistani man on a train wounded five people, and a suicide bombing by Syrian asylum seeker left 15 people injured six days later.

The arrival of 890,000 refugees last year has polarized Germany, with critics calling the influx a serious security threat.

Merkel said earlier that if the attacker turned out to be an asylum seeker, this would be "particularly sickening in relation to the many, many Germans who are involved every day in helping refugees."

The attack in Berlin comes five months after Tunisian Islamist extremist Mohamed Lahouaiej Bouhlel plowed a truck into a crowd on the Nice seafront, killing 86 people.

As well as sharing their condolences, they "stressed the need for European solidarity in the fight against terrorism," Seibert said.

the troll trying to sound smart but failing miserably

I respect galaxy and eagledung for their brilliant analysis and their non sectarian views. I hereby declare Both of you honorary citizens of Israel.

I lost respect for Mr. Flamethrower because of Mr. @rabbishlomo

da7aktna @flametroller specially since you said years ago you never watch TV;)

All my respect and admiration go to Mr. Flamethrower because he does not watch TV.

It was Germany's mistake to allow people in who refused to integrate into their culture to begin with. Now look at the results, you'd figure they'd learn from Lebanon's stupidity letting Iran's Hezbollah and Egypt/KSA's ISIS infect the country. Do people want to purposely live in fear? I really don't get it, and honestly this toxic infiltration needs to stop.