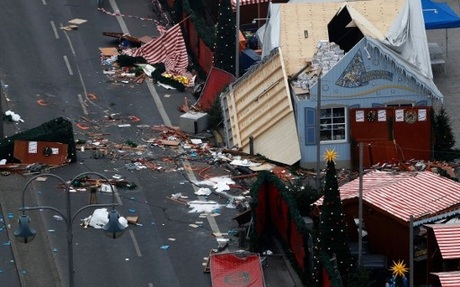 A Lebanese national was among those wounded in the deadly truck attack at a Christmas market in Berlin on Monday, Lebanon's embassy in Germany said Tuesday.

“The Lebanese embassy in Germany has informed the Foreign Ministry that Lebanese national Mohammed Hassan Wehbe, 41, was among those injured in the terrorist attack in Berlin yesterday,” state-run National News Agency reported.

The man is in a “stable condition,” the agency added.

Twelve people were killed and around 50 others were injured, 18 of them critically, when a truck plowed into a busy Berlin Christmas market late Monday, in what German Chancellor Angela Merkel called a "terrorist attack."

I wonder how this will be spinned to blame Assad.

Does assad needs to do more than he alreaddy did to be blamed, starting by lebanon u know the assassinations, the mascs bombing, the small bombs sent with smaha...to what he is doing to his people, or all this is just some conspiracy theory :)
By the u finished ur daily lobayaka ya nostollah carols?....

they let these savages into their country, i say: pin merkel with the murders and prosecute her for high treason.