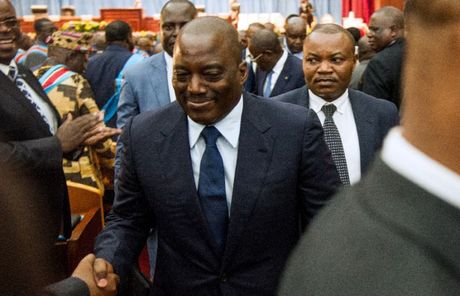 Kabila's second and final five-year term ended on December 20, but he has shown no intention of leaving office soon, sparking violent protests that have left at least 40 people dead this week, according to the United Nations.

The influential Catholic Church has been brokering talks between the government and opposition and hopes rose this week of an imminent deal, with a draft seen by AFP outlining plans for fresh elections at the end of next year, when Kabila would step down.

But that optimism has been slipping, and negotiators from the two camps left church offices in Kinshasa just before 5:30 am (0430 GMT) without a deal to prevent a fresh descent into conflict in a country that has suffered two horrific wars since 1996.

"The work is practically finished -- the final touches are all that is left to do before the deal is signed," insisted Marcel Utembi, president of the Congo National Episcopal Conference (CENCO), who had pushed for a deal before Christmas.

But others indicated there was still a long way to go.

"Everything is still blocked on how (public affairs) will be managed during the transition period," said opposition delegate Francois Muamba.

Two opposition delegates said the squabbling sides could return to the table Saturday morning, but there was no confirmation from CENCO. Negotiators from Kabila's political alliance were remaining tight-lipped.

- 'Serious mediocrity' -A frustrated CENCO official, speaking on condition of anonymity, blasted DR Congo's political class for "serious mediocrity" in their inability to reach a deal.

"They have called into question everything we arranged the day before," the official said as talks stretched into the night.

Time is pressing as the bishops overseeing the talks are due to quit the capital Saturday afternoon to return to their congregations in time for Christmas Eve mass.

Tensions are still running high, with security forces spraying live ammunition at a string of anti-Kabila protests in Kinshasa and other towns this week, killing at least 40 civilians, according to the UN.

Congolese police put the toll at 20 dead, saying they had largely been killed in "looting" or by "stray bullets".

Other sources say somewhere between 56 and 125 people have been killed in a week of clashes, not counting the unknown toll from fighting between security forces and an anti-government militia in the central town of Kananga.

Kabila, 45, has been in power since the 2001 assassination of his father Laurent at the height of the Second Congo War.

He was confirmed as leader of the mineral-rich nation in 2006 during the first free elections since independence from Belgium in 1960, and re-elected for a second term in 2011 in a vote marred by allegations of massive fraud.

Constitutionally banned from seeking a third term, he obtained a controversial court ruling in May stating that he could remain in power until a successor was chosen.

DR Congo has never seen a democratic transfer of power following polls since independence from Belgium in 1960.

Two decades ago, the country collapsed into the deadliest conflict in modern African history. Its two wars in the late 1990s and early 2000s pulled in at least six African armies and left more than three million dead.