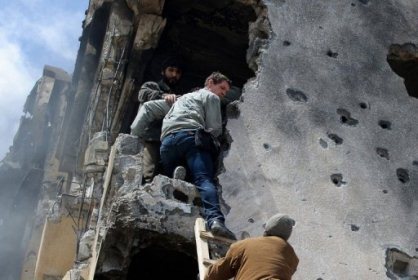 After dangerous, dusty assignments in Iraq and Afghanistan, photographer Michael Kamber has chosen a tough area of New York City as the new backdrop for his interest in war.

The award-winning journalist recently opened a gallery in the Bronx, the first in the borough, and he hopes that his gesture will both help photographers and build bridges with a neighborhood that, while not at war, certainly knows the harder side of life.

The Bronx Documentary Center's inaugural exhibition focused on images by Tim Hetherington, a British photographer who was killed in April, along with his colleague Chris Hondros, while working in the rebel Libyan town of Misrata.

Kamber says the 40-year-old, who was killed in shelling by besieging forces loyal to the late Libyan leader Moammar Gadhafi, had always been fascinated by the Bronx, one section of which has the highest poverty rate of any district in the United States.

"That was something we'd spoken about for a long time and Tim in particular was interested in new audiences," said Kamber, who covered the U.S. invasion and occupation of Iraq for The New York Times.

"Tim felt like we always reach the same audience and always sell and put in auctions in Chelsea, you know, Soho. We don't look for new people."

The idea of establishing a gallery in the Bronx, rather than the swish districts of lower Manhattan, "excited" Hetherington, Kamber says. "He loved the Bronx."

The surrounding neighborhood seems to have adopted its unusual new addition. Schoolchildren have turned the gallery into one of their meeting points while curious passersby stop in, wishing to know more or just congratulating staff.

The paint still smells fresh in the exhibition room where you can see Hetherington's final pictures, taken before he was fatally wounded. The helmet and flack jacket he wore during that fatal day also sit by the door.

Danielle Jackson, director of the Bronx Documentary Center, said Hetherington and she talked shortly before his death "about what should be done about photography and how you need to get it out of the museum."

Kamber also said his friend had wanted photography to escape its usual confines.

"He thought like the media was sometimes used as a form of propaganda. It gave people what they expected to see week after week, months after months, and he felt that in so doing we became part of the propaganda," Kamber said.

In addition, the center has living and working space for young photographers upstairs, an arrangement that Benjamin Petit, a French photographer, said was "very inspiring."

"We wanted photographers there, people that would be able to work on projects, people are coming from the street, children are helping as volunteers," Kamber said. "In a sense, in this building, we're building a community."

The Bronx, where more than one in four lives in poverty, could do with the attention.

"It's a rough area. There are not many cultural organizations," Jackson said. "So people have been super responsive."