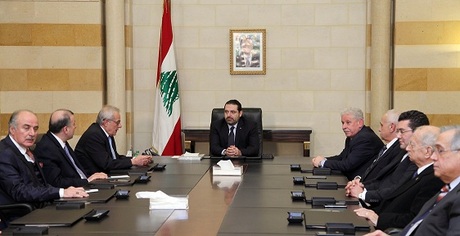 Prime Minister Saad Hariri on Monday lauded President Michel Aoun's visit to Saudi Arabia as an “important step,” as he stressed his keenness on “the policy of dialogue” in Lebanon.

“The visit of President Michel Aoun to the Kingdom of Saudi Arabia started today and we consider it an important step on the correct Arab course to restore Lebanon's ties with the kingdom and the rest of the Gulf countries,” Hariri told a delegation from the Beirut Families Union.

At the domestic level, Hariri said he is “keen on endorsing a policy of dialogue, openness and rapprochement to resolve all the problems we might face.”

“We will exert everything in our capacity to restore the citizen's confidence in the State,” the premier added.

“The region is going through difficult circumstances and thank God we have managed to neutralize Lebanon from the tensions and wars around us, and we will maintain this policy to keep Lebanon away from the blazes that are surrounding us,” Hariri went on to say.

Aoun arrived Monday in Saudi Arabia on his first foreign trip since taking office, starting an Arab tour that will also take him to Qatar and Egypt.

Information Minister Riachi has announced that the issue of the suspended Saudi grant to the Lebanese army will be on Aoun's agenda during his visit to Riyadh.

Saudi Arabia halted a $3 billion program of military aid to Lebanon in 2016 to protest what it said was "the stranglehold of Hizbullah on the state."

It also urged its citizens to leave Lebanon and avoid travel to the country.

MP Alain Aoun of the Change and Reform bloc has stressed the keenness of President Aoun and the Free Patriotic Movement on restoring normal ties with the Arab Gulf countries, noting that the president's visit to Riyadh will achieve this goal.

“President Michel Aoun's trip to Saudi Arabia will launch a new chapter in the Lebanese-Saudi relations and will pave the way for a new phase between the two brotherly countries, and subsequently between Lebanon and the rest of the Gulf states,” Aoun told the Kuwaiti al-Anbaa newspaper in remarks published Sunday.

“This visit is important because it will return ties to their normal and historic state, which will happen gradually through ending the Saudi and Gulf boycott of Lebanon and halting all the negative measures against it, after the relations between Beirut and the Gulf states deteriorated in recent years due to the regional conflict,” MP Aoun added.

“The region is going through difficult circumstances and thank God we have managed to neutralize Lebanon from the tensions and wars around us, and we will maintain this policy to keep Lebanon away from the blazes that are surrounding us,” Hariri went on to say.

what is this retard talking about? He thinks Lebanon is Switzerland neutral forgetting that he shares a government with a terror group that has more than 20,000 terrorists fighting in Syria, Iraq, Yemen and Bahrain.

A few days ago, the iranian deputy foreign minister visited Lebanon and the first thing he did was to visit the grave of the chief terrorist who assassinated Rafik Hariri, Imad Mugniyeh. The second day, Hariri received the iranian envoy at the Grand Serail.