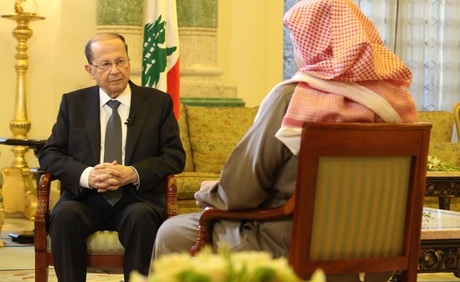 President Michel Aoun has announced that he is “not in favor” of Hizbullah's military intervention in neighboring Syria, while noting that the Saudi military grant is being discussed by the "competent ministers" of the two countries.

“We are preventing harm from being launched from Lebanon against any state and we're preventing the entry of terrorists from Syria into Lebanon and vice versa,” Aoun said in an interview with Al-Arabiya television that was recorded during his presence in Riyadh.

Noting that the decision by some Lebanese parties to take part in the Syrian war was not “the State's choice,” Aoun pointed out that he does not support this choice.

“As head of state, I do not have the right to side with anyone against anyone, because I represent all Lebanese,” the president added.

“Lebanese have various viewpoints on this issue and positive neutrality is the right stance,” Aoun went on to say.

He also stressed that the Syrian crisis “can only be resolved politically, seeing as global forces can fuel the war externally.”

Turning to Lebanon, the president underlined that he is against “any weapons used domestically.”

He also noted that Hizbullah's arsenal of arms “has become part of the Middle East crisis, which involves the U.S., Russia, Iran, Turkey and Saudi Arabia.”

“This is a very major issue and it exceeds the Lebanese state's ability,” Aoun noted.

In another interview in Qatar with Al-Jazeera television, Aoun noted that the Saudi military grant for the Lebanese army is still “on the table” and that the issue is being discussed by the two countries' competent ministers.

“The issue has not been finalized yet due to the presence of some pending matters, seeing as the issue does not only concern Lebanon and the kingdom but also France,” Aoun added.

Asked about the government's quick approval of key decrees that pave the way for oil and gas extraction off Lebanon's coast, the president stressed that the swift passing of the decrees was not the result of a “deal” among the political parties.

“The approved points are exclusively related to the basins,” he noted.

Separately, Aoun said the upcoming parliamentary elections will be held according to a new electoral law.

“There is a Lebanese will to pass a new law and the debate is currently revolving around which law is the best for everyone,” the president added.

“I'm not against any white or red revolution, on the condition that it is internal, progressive and targeted at the future. It is unacceptable to return to the distant past... and the bloody events and reactionary ideologies cannot be a solution to the Arab problems,” Aoun explained.

talk is indeed very cheap. How are you preventing harm from being launched from Lebanon?:)

by having the LAF and the General Security salute hezbollah terrorists every time they cross the border.

even more so, all the so called hezbollah advisors and trainers who go to bahrain, yemen and iraq travel through beirut airport on commercial flights with the full knowledge of abbas ibrahim. This is beyond a joke!

not to mention the general security issues passports to these shia terrorists with fake names just like they did with the cell that went to Egypt a few years ago and nassrallah acknowledged its role in one of his speeches. If I recall the fake name used by the cell's leader was "Sami Mansour". During the Morsi revolt in Egypt, this terrorist was freed when hezbollah sent another terror group to break into the jail were he was kept. Later he appeared next to nassrallah in one of his speeches where he was welcomed as a hero right under the nose of the LAF and the general security, many officers of both were present during nassrallah's speech.

I have so much respect for General Aoun who is now president for not being in favor of hezbollah's role in Syria and for preventing harm from being launched from Lebanon against any state.

He also noted that Hizbullah's arsenal of arms “has become part of the Middle East crisis, which involves the U.S., Russia, Iran, Turkey and Saudi Arabia.”

before the Syrian war was it part of the Middle East crisis? lol

Hezbollah weapons are the only reason he is president today.

you gotta feel sorry for him.... when he signed the MOU with hezbollah he did not realize at that time that its weapons were part of the Middle East crisis.

that is the definition of a 'strong' and 'made in Lebanon" president.... just ask Geagea;)

Aoun 'Not in Favor' of Hizbullah's Syria Role

Southern...... Yesterday
Aoun is the president!

but you are now in charge, tell us what you are going to do about it? Is this how a President handles tough situations?

I had to laugh at his " living democracy' European style and his understanding of governance.

.... and he practiced it upon his return to Lebanon, signed an MOU with an illegal militia and "wrote" an one way ticket to Hariri as democracy would have it.

...so is human life on this plant.

I take my hat off to the president lets hope he continues to speak like this as he now is speaking on behalf of all Lebanese when he made this statement.

be sure that every word of what he said was approved by hezbollah. " i inherited the problem, it is not my fault, it is bigger than me and Lebanon" blah blah blah.

Well put lebanon00.01, but at the risk of sounding critical I have to poit out that you forgot to add "or else". Please review the chapter on "how to write a threatening letter" in your Syrian Moukhabarat handbook. It's right before the "how to commit terrorist acts and look innocent by blaming others" chapter, Michel Samaha forgot to read the chapter in it's entirety and ....

If this waffler was serious about hezbollah's weapons and illegal presence in Syria and other Arab countries, he would follow in the footsteps of president Suleiman by reinforcing the Baabda Declaration and the Dissociation policy instead of this childish approach of " nothing i can do about it and it is above my head" attitude. No wonder these iranian hezbos were fierce in their attacks on president Suleiman.

before aoun became president, he made sure that hezbollah gained more strength and helped it erode the state and its institutions. He defended the May 7th invasion of Beirut and justified it too. He blessed their intervention in Syria and other places. He used their weapons to reach the presidency. Now, he puts on the takiah babyface on and pretends he is an innocent bystander.

Very true tex. This is our STRONG President.... pfff...coward!

aoun also said he would personally guarantee hariri's safety if hariri elected him. aoun is building a farm and reinforcing it rather than a state. That is how he understand governing!