With Eye on Trump, Paris Meeting to Push for Mideast Peace 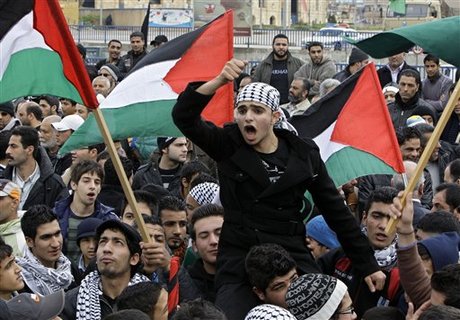 Around 70 countries and international organizations make a new push for a two-state solution in the Middle East at a conference on Sunday, just days before Donald Trump takes office vowing unstinting support for Israel.

The Paris meeting aims to revive the moribund Israeli-Palestinian peace process, amid fears of fresh violence if Trump implements a pledge to recognize the contested city of Jerusalem as Israel's capital.

But neither Israel nor the Palestinians will be represented in Paris, and Israeli Prime Minister Benjamin Netanyahu has dismissed it as a "rigged" conference, insisting that only bilateral talks can bring peace.

On his farewell tour, U.S. Secretary of State John Kerry will join foreign ministers from around 40 countries and representatives from the U.N., EU, Arab League and other organizations in calling for a two-state deal.

The meeting is also expected to back a U.N. resolution last month condemning Israeli settlement building in occupied Palestinian territory.

The U.N. Security Council adopted the resolution after the Obama administration -- in a parting shot at Netanyahu -- took the rare step of abstaining from the vote.

Netanyahu called the resolution "shameful" and has also lashed out at the Paris meeting.

On Thursday he called the gathering "a rigged conference, rigged by the Palestinians with French auspices to adopt additional anti-Israel stances."

"This pushes peace backwards," he said, calling it "a last gasp of the past."

The Palestinians, who are trying to rally opposition to a contentious promise by Trump to move the U.S. embassy from Tel Aviv to Jerusalem, have lauded the multilateral initiative.

"The bilaterals have not ended occupation even though we have been engaged in bilateral talks for the last 26 years," said senior Palestinian official Mohammad Shtayyeh.

Writing in Le Monde newspaper on Thursday, Foreign Minister Jean-Marc Ayrault said France was not trying to impose a solution on the Israelis and Palestinians but wanted to halt an "infernal cycle of radicalization and violence."

Palestinians were seeing "their future state melt away" as Israel continued expanding its settlements, "resulting in more occupation," he said.

Israelis meanwhile were subjected to "nearly daily violence by those who "harness frustrations to promote an agenda of hatred," Ayrault added.

Peace efforts have been at a standstill since a U.S.-led initiative collapsed in April 2014.

Hardline Israeli lawmakers, including some from Netanyahu's Likud party, have said Trump's win represents an "historic opportunity" to end chances of Palestinian statehood.

Trump, who opposed December's U.N. vote, has said "there's nobody more pro-Israeli than I am" and has named a hardliner, David Friedman, as his ambassador to Israel.

French diplomats said they had sounded out Trump's transition team about the Paris conference, but that they were "reticent."

In his Le Monde article, Ayrault said the international community had a "responsibility to reiterate this obvious fact: in no way can a unilateral decision be compatible with the two-state solution."

It was not clear whether he was referring to the possible move of the U.S. embassy in Israel.

Israel has said it fears the conference could produce measures that could be put to the Security Council before Trump is sworn in on January 20.

The French have insisted they have no plans for follow-up action.

"If there are no consequences, if nobody is listening, if they are repeating the same thing they said over and over again, it amounts to a charade," Nathan Thrall, senior Middle East analyst at the International Crisis Group said, dismissing the conference as "inconsequential."

The French have rejected the criticism.

The prospect of a radical shift in America's Middle East policy under Trump, one French diplomat said, made it all the more important to "send a message" in favor of peace.