Aoun: Parliamentary Vote to be Held on Time under Consensual Law 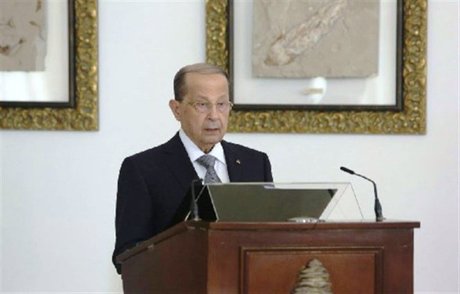 President Michel Aoun announced Thursday that the upcoming parliamentary elections will be held “on time” and according to a law “that enjoys the consensus of the Lebanese.”

Aoun also called for voting for “parties and not individuals” in the parliamentary polls.

“We have founded parties that can create strong blocs and make achievements. An MP alone does not have the ability to plan or impose certain planning, that's why we encourage voting for parties and not individuals, who are an absent and ineffective force in parliament,” Aoun told a delegation comprising the municipal chiefs and mayors of the Keserwan district.

Retired Brigadier General Chamel Roukoz, the former Commando Regiment chief and Aoun's son-in-law, attended the meeting. Roukoz, who hails from Keserwan, intends to run in the next parliamentary elections.

Interior Minister Nouhad al-Mashnouq announced Wednesday that the parliamentary elections “will be held on time” under the controversial 1960 electoral law unless a new law is passed.

Hizbullah has repeatedly called for an electoral law fully based on proportional representation but other political parties, especially al-Mustaqbal Movement and the Progressive Socialist Party, have rejected the proposal, arguing that Hizbullah's arms would prevent serious competition in the party's strongholds.

Mustaqbal, the Lebanese Forces and the PSP have meanwhile proposed a hybrid electoral law that mixes the proportional representation and the winner-takes-all systems. Speaker Nabih Berri has also proposed a hybrid law.

It should come as no surprise to anybody that I have put my faith in general aoun who is now president for separately vowing to “continue the course of reform, combating corruption and controlling expenditure.”

I also respect him for improving things in the country as soon as he took office.

Yes,great but when will
Lebanese women have equal rights? Is it during the presidency of His Excellency General Michael Aoun or after 500 years?????