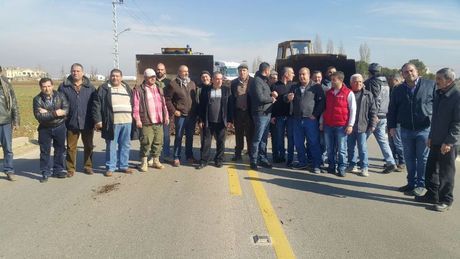 Several key roads in central Bekaa were blocked for a second consecutive day on Friday in protest at the abduction of 74-year-old merchant Saad Risha.

“The Furzol-Zahle road was blocked with bulldozers near the town's intersection, in the presence of Furzol municipal chief Melhem al-Ghaddan, Saad Risha's son Jimmy, the businessman Michel Daher, and residents and dignitaries from the region,” state-run National News Agency reported.

The Riyaq-Terbol road and the al-Fayda-Zahle road were also blocked by protesters.

Members of Brital's municipality and a number of dignitaries meanwhile staged a sit-in on their town's public road in solidarity with the family of the abductee and to protest the recurrent abductions in the region.

The captors have been identified as five residents of Brital and the army has been carrying intensive security measures in and around the town in search for the kidnappers and the elderly abductee. Speaker Nabih Berri has also dispatched an envoy to the town to help in the case.

“The kidnappers only represent themselves because Brital is the land of martyrs and will always stand in the face of takfiris,” Brital municipal chief Ahmed Ismail said, demanding the release of Risha.

President Michel Aoun meanwhile reassured a northern Bekaa delegation that the presidency is following up in the case.

“All security forces have been mobilized to return him safe to his family,” Aoun added.

MTV meanwhile reported that rumors were spreading in Zahle about “counter-abductions within hours” should Risha remain abducted.

Risha was abducted Wednesday in the Bekaa town of Qab Elias as he was closing his wholesale foodstuffs shop.

I just hope people don't think the kidnappers are shia as usual.

It is no secret or surprise that my respect for general aoun who is now a fully fledged president is increasing over time for improving things in the country and for saying that 'All Security Forces Mobilized'.

I admire him more than anything else for stressing during the oath ceremony that he will be carrying out pre-emptive strike against terror, corruption, and lawlessness.

I forgot to express my admiration for Brital municipal chief Ahmed Ismail for saying the kidnappers only represent themselves because Brital is the land of martyrs and will always stand in the face of takfiris .

brital is the land of filth and terror and will always be.

You're not missing much if you have already visited a public W.C.

he learned takiah practices from his boss!

pick up the hotline phone next to you and call your boss nassrallah and Saad Risha will be released within minutes.

Jannah, Firdous and I are in Zahleh as we speak burning tires and erecting sand barricades in protest at the Houthians' kidnapping of saad risha.

The Houthians must be disciplined and punished and their excuse they are resistance can no longer be tolerated.

I ask all the beautiful, young and educated women to go on the streets and denounce the Houthians' attempt at kidnapping Christians, killing the wildlife, and turning our beautiful country into a jungle similar to their mother country, Yemen.

“The kidnappers only represent themselves because Brital is the land of martyrs and will always stand in the face of takfiris,” Brital municipal chief Ahmed Ismail said, demanding the release of Risha.

The kidnappers represent 'ashraf neiss' and not just themselves.

So the kidnappers are relatives of Brital's municipal chief Ahmed Ismail who is giving lectures in morals???

Once again, the shia trolls of the forum headed by @flamerotten and his double @mowaten are no where to be seen on this article, but are busy trolling on the yemen article.

what are they going to say? they were brought up on takiah lies.

were the kidnappers arrested or rewarded?