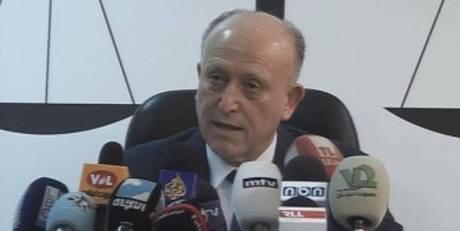 Former justice minister Maj. Gen. Ashraf Rifi has lashed out at his former allies in the March 14 coalition, accusing them of “bowing to Hizbullah.”

"Some of us endorse a principled approach while others resort to pragmatism... Pragmatists might cooperate with the occupier in a certain period while principled individuals shun any post or personal gains,” Rifi added.

He warned that “the approach of pragmatism sometimes leads to high treason.”

“Military imbalance does not at all justify agreeing to Hizbullah's policies,” Rifi added, pledging to continue confronting the Iran-backed party his stances.

Asked about his opposition to Prime Minister Saad Hariri's policies, the ex-minister said: “He who wants to bow let him bow alone. I will not let leniency go down in my history and I cannot find a convincing justification for this.”

“Hizbullah cannot overlook or eliminate me, even if it possesses 200,000 rockets. I'm not engaged in a military confrontation with them. We're equal demographically and we are present on the same land,” Rifi went on to say.

As for the new government, the ex-minister described it as “Hizbullah's government.”

“The party has 17 ministers in this government and this is a major national crime against the cause,” Rifi lamented.

As for the districts in which he will field candidates in the next parliamentary elections, the ex-minister said he will have nominees in Tripoli, Minieh, Dinniyeh, Akkar, central and western Bekaa, Iqlim al-Kharroub and Beirut's second and third electoral regions.

“We will not engage in Sidon's electoral battle out of respect for (MP) Mrs. Bahia Hariri and ex-PM Fouad Saniora,” Rifi added.

“We will not allow a win for any of Hizbullah's candidates in our electoral strongholds,” the former minister vowed.

Yes Rifi, go to your polls and collect as many of your Salafi supporters as you can get.

It will not help you, and your influence will not reach any area outside your Tripoli stronghold and Akkar.

"Hizbullah cannot overlook or eliminate me, even if it possesses 200,000 rockets"
They sure overlook you though, I cant remember a time where they took your sorry behind into consideration.
As for rockets, just one would be enough to send you on the moon, but then again, one would need to care enough about your pathetic existence to go through the trouble

didn't the filthy iranian say that Rifi is insignificant, yet every one of his comments is about Rifi.

What would happen to the troll if Rifi was 'significant'? lol

Mystic, tripoli and akkar are at least half of Lebanon.... good you acknowledge his influence ya irani;)

"tripoli and akkar are at least half of Lebanon" lol. yea. sure. zahhet (bis)

and where is the other half!? Arsal maybe... nusra's lover up to the bone

southern, didn't you steal his name and used to post as @justice2?

when will you congratulate hariri for becoming PM as you promised ya southern irani takiah liar?

one thing southern needs to steal is a few brain cells.

I make one comment about rifi, and suddenly "every one of my comments is about Rifi" ? lol zahhet

Tripoli and Akkar is nothing, how come a handful of Alawites in Tripoli Jabal Me7sen managed to hold back hundreds of thousands of Wahabis?

".mowaten.
nobody who is anybody follows, respects or fears him."

and it is so clear to everybody the iranian mouthpiece who is nobody does not follow Rifi's news;)

The nonsense, hatred and sectarianism emanating from the party of Mullahs is amazing. Tripoli is not nothing. It is the second largest city in Lebanon and Akkar is one of the army's largest reservoir of men. And was it not for the army rightly intervening to ensure that no side advanced to the other side's area, the few hundred fighters would have been more than enough to storm Jabal Mehsin. You may have thought that it was OK to shell Tripoli by artillery or storm Beirut and terrorize its population, but the overwhelming majority of people in Tripoli wants the army and the government institutions (another falsafeh) to protect them and not militias. This include Sunnis and Alewites.

Contrary to Gen Rifi claim and with the vote in Tripoli and Akkar split three ways, it is very difficult to read the electoral map and determine who will win. Many will vote for him because of his stance vis Hezbollah arms. But many will also vote for Mustaqbal because, while agreeing with Gen Rifi assessment, they do want to risk a confrontation knowing that the Hezbollah would not hesitate using arms.

they do not want to rik

It's a fact, that the Alawites managed to hold back overwhelming numbers of Salafis besieging them in Jabal Me7sen.

Yes I agree that the area should be under army control, like all the rest of Lebanon. I just wanted to give the people of Jabal me7sen credit for fighting hard for their survival.

Keep saying you want the Lebanese army to control all of Lebanon. May be one day, you will believe it.

ArabDemocrat, yes but they are. Look in all main cities of the South, or Baalbek, or Southern Beirut for that matter, the Army is in full control of Lebanon, the Resistance is here to back it up against threats such as Takfiri groups and Israel.

That is utter nonsense. The Hizb is effectively in control of large areas of South Lebanon, the dahieh and the Bekaa valley and the Lebanese army presence is either merely cosmetic or to handle petty crimes

You've probably never been to Lebanon then.

sorry @flametroller, i posted it above but it belongs right here up yours:

you have to excuse them @flametroller, that was because they did not know your aoun was going to take them by the horns and force them to elect him.... and by forcing i mean not like in violent but like when your moma forces you to eat your spinach.

The Saudis replaced their stooge. Once the money runs out, he'll change his tune.

Rifi is correct on every count. This government has 17 hezbollah puppets. Elections are coming and the ballot boxes will determine who is relevant.

yes, let's see what the ballot boxes say. unless they slap his face down in the dirt, then he'll claim russian hackers cheated him.

lol @mowateh; if your crystal ball says so, then it must be true.

and the misery is he thinks he is funny

Bless you General Rifi... always a patriot and will always remain a thorn in the side of the hateful iranian thugs.

We will remain a thorn in his side aswell as yours.

The more Ashraf Riffi is hated by the shia iranians inhabiting dahieh, the more it proves he is on the right path.

absolutely. that is if your right path consists solely in hating "shia iranians inhabiting dahieh"

you are a beacon and a model for compassion and love.

the filthy sectarian almost won a Nobel prize for his humanitarian efforts.

@barrymore, you hit a raw nerve right there.

when you have been abused and violated as much as this sectarian, it does not hurt anymore.

i believe he does.... he's seen enough scumbags like you it is safe for him to be certain.