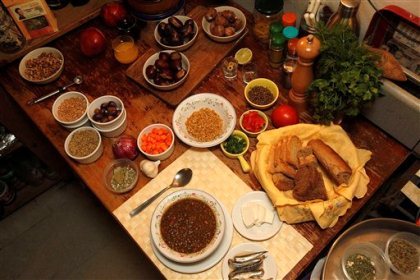 It's the ultimate belt-tightening handbook: No Meat? Push an eggplant through the grinder instead. Chew your food long enough for your stomach to feel full. And don't forget to sweep crumbs off your table and into a jar.

These are some of the tips Greeks used to survive the World War II occupation that have been collected in "Starvation Recipes" — a cookbook that has become a surprise hit as millions of Greeks struggle to make ends meet in a new era of hardship brought on by economic crisis.

In the grim years of the occupation, starving Athenians invented new ways to stay alive, helped by daily advice columns in the capital's newspapers known as "survival guides."

Historian and high school teacher Eleni Nikolaidou spent 18 months compiling recipes and survival tips — combing through more than 6,000 scanned newspaper clippings from the 1941-44 Nazi rule to produce her book. "Starvation Recipes" was released this year and is on its second print run.

"It was all about getting by with very little," said Nikolaidou, sitting at her Athens home, with books everywhere stacked to the ceiling.

Nikolaidou stumbled onto the subject two years ago while working on a masters degree on Greece's wartime economy.

"I read an article from the front page of a newspaper, 'How to collect crumbs' — a little each day so that you could have a cupful of crumbs by the end of the week, something extra to survive. It really struck me."

She was drawn in by the details: Horseshoes used to reinforce dilapidated footwear, baked sand to preserve lemons, and stray cats and dogs hunted on Athens streets for food.

"People would come up with new ways to cheat their stomachs: There were starters designed to cut your appetite. And people were advised to chew their food very, very slowly, so it felt as though they were eating more," Nikolaidou said.

"There was no sugar available, so at weddings, the sugared almonds handed out were black. Raisin pulp was used as the sweetener."

Coffee shops had no coffee, so they served a brew made out of ground chickpeas. Newspaper articles at the time encouraged Athenians to make the best of it.

"The new coffee can be enjoyed just as much as a prewar coffee, because people visit the coffee shop for more than just the coffee," one newspaper wrote.

Publisher Oxigono says "Starvation Recipes" has sold about 2,000 copies — considered an early success despite the modest number, helped by Nikolaidou's appearance on television, newspaper articles and Internet buzz. A third print run is planned this month.

After decades of overspending, Greece was forced from late 2009 to grapple with its ruined finances by imposing harsh taxes and surviving on rescue loans from the IMF and European Union.

The result means 9 out of 10 Greeks are changing their food-shopping habits, according to a September survey by the consumer organization KEPKA: People are now eating out less, cutting back on meat and any extras, and swapping quality food brands for cheaper substitutes.

The growing demand for affordable meals has been met by magazines and a new batch of low-budget cookbooks, such as "The Cooking Economy" and "Family meals for €5 — 110 recipes for the financial crisis."

But the dire wartime hardship has little in common with the current crisis. Even as the number of vacant stores and homeless grow by the day, Athens' coffee shops are busy and streets filled with new cars.

During the occupation, dead bodies were collected off the street each morning, the hills were stripped bare of wild greens, and families had to keep round-the-clock guard of their backyard chicken coops.

But for Nikolaidou, worrying signs of sudden poverty have arrived in this crisis, too.

"There are children who go to school without enough to eat," she said. "The circumstances were of course much more extreme. But there are people, today, who open up their cupboards, and see little more than a bag of flour, and think — 'what can I do with that?'"

"Most people spend more than they need to, and still eat badly," says Bletsas, who runs the English-language website www.cookingeconomy.com spun out of a 2010 book on frugal dining.

Bletsas, 31, honed his thrift techniques while living in Britain as an engineering student, and later adapted his modest menus to Greece's renowned Mediterranean diet.

He has simple advice for Greeks laboring under the crisis.

"Never, ever throw anything away: You can preserving it, freeze, cook it, reuse it, or give it to someone who needs it more than you."