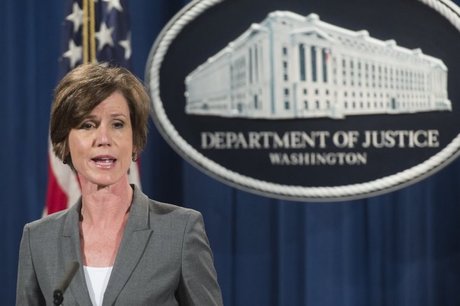 In a caustic statement, Trump's White House said acting attorney general Sally Yates "betrayed" the Department of Justice in defying the president and had been relieved of her duties with immediate effect.

Yates -- a career prosecutor promoted by president Barack Obama and held over by Trump pending confirmation of his own nominee, Senator Jeff Sessions -- had refused to defend Trump's ban on immigration from seven Muslim nations.

In a memo to Department of Justice staff, she expressed doubts about the legality and morality of Trump's decree.

"My responsibility is to ensure that the position of the Department of Justice is not only legally defensible, but is informed by our best view of what the law is," Yates wrote.

"For as long as I am the acting attorney general, the Department of Justice will not present arguments in defense of the executive order, unless and until I become convinced that it is appropriate to do so."

In the end, her tenure lasted only a few more hours.

The White House snapped back, accusing Yates of being "weak on borders and very weak on illegal immigration."

Trump has replaced Yates with Federal prosecutor Dana Boente as he awaits the Senate confirmation of Sessions.

Boente said he would defend Trump's directive, stating that it was "both lawful on its face and properly drafted."

Trump's executive order suspends the arrival of all refugees for a minimum of 120 days, Syrian refugees indefinitely and bars citizens from Iran, Iraq, Libya, Somalia, Sudan, Syria and Yemen for 90 days.

Several federal judges have since filed temporary stays against the decree's implementation.

On Sunday, attorneys general from 16 US states, including California and New York, condemned Trump's directive as "unconstitutional" and vowed to fight it.

He faces a vote Tuesday on the Senate Judiciary Committee, and then has to be confirmed by the full Senate before taking up the post.

Congress's top Democrat, Senator Chuck Schumer said Yates's firing underscored how important "it is to have an Attorney General who'll stand up to the White House when they violate the law."

The firing came as Trump said he would announce late Tuesday his pick to fill a Supreme Court opening. The unveiling was originally scheduled for Thursday.

Democratic lawmakers have vociferously opposed Trump's immigration order and Republicans are privately seething over the way his White House has handled the issue.

The two dismissals in one night has echoes of President Richard Nixon's 1973 "Saturday night massacre" during the Watergate scandal.

House Democrat John Conyers, Jr. said that Trump's conduct "is Nixonian in its design and execution," and threatens the justice department's independence.

"If dedicated government officials deem his directives to be unlawful and unconstitutional, he will simply fire them as if government is a reality show," Conyers said in a statement.

- 'American values' -In remarks at the White House and on Twitter, Trump tried to play down the order's impact and defended the decision not to give advance warning to border guards, diplomats and travelers.

"If the ban were announced with a one week notice, the 'bad' would rush into our country during that week. A lot of bad 'dudes' out there!" Trump claimed.

Around 48 percent of Americans support a freeze on immigration from "terror prone" regions, even if it means turning refugees away, according to a Quinnipiac poll released Monday.

But after a weekend of chaos at airports, protests and a diplomatic outcry, criticism even came from Trump's predecessor Obama, breaking a silence he had held since leaving office.

"President Obama is heartened by the level of engagement taking place in communities around the country," spokesman Kevin Lewis said, adding that "American values are at stake" and noting Obama rejects faith-based discrimination.

Calling the measure a tragically "unnecessary" move that will fuel violent extremist propaganda, they said it "sent exactly the wrong message to the Muslim community here at home and all over the world: that the US government is at war with them based on their religion."

Late Monday, a crowd chanted slogans and held banners outside the Supreme Court, which could ultimately rule on the measure.

AFP has left the building.

SANA should probably take the place....