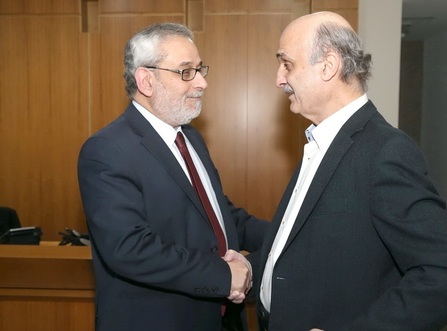 A Tashnag Party delegation held talks Friday in Maarab with Lebanese Forces leader Samir Geagea, after which it stressed the need to pass a “fair and modern electoral law.”

“We emphasized the need to hold the elections within the constitutional timeframe while ensuring correct representation for all political forces, confessions and sects,” Tashnag MP Hagop Pakradounian said after the meeting.

“Accordingly, we and the LF share the viewpoint that efforts should be intensified ahead of the February 21 deadline in order to reach a fair and modern electoral law,” he added.

“We must forget the 1960 law... so that we leave a modern law for the coming generations and so that, as Christians, we feel represented in this State, not according to our numbers but rather according to our existential and real strength as founders of this entity and country,” Pakradounian added.

He also said that that “there are some reservations regarding the hybrid electoral law.”

Asked whether Tashnag will ally with the LF in the elections, Pakradounian said his party supports the rising LF-Free Patriotic Movement alliance and “feels to be in the heart of this new equation that led to the election of General Michel Aoun as president.”

“We have stressed the need for Christian unity throughout our political history and today we're witnessing the completion of an essential part of this unity and we want all other Christian and national forces to take part in this endeavor,” Pakradounian added.

The LF, the FPM, Hizbullah, al-Mustaqbal Movement and AMAL Movement are discussing several formats of a so-called hybrid electoral law that mixes proportional representation with the winner-takes-all system.

The last polls were held under an amended version of the 1960 electoral law and the next vote is scheduled for May.