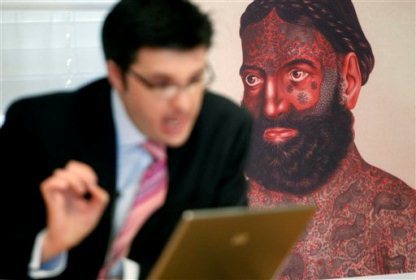 Tattooed mummies in ancient Egypt, Crusaders who branded their foreheads with crosses, and New Zealand's inked Maori warriors were fodder for an unusual conference at a Vatican university Tuesday on the role of tattoos in shaping identity.

"Into the Skin: identity, symbols and history of permanent body marks" was the brainchild of a Christian arts association and Israel's ambassador to the Holy See, an unlikely expert in the field given Judaism's prohibition of tattooing and the painful role that tattooed serial numbers played in the Holocaust.

Ambassador Mordechay Lewy acknowledged the paradox, saying the living memory of Auschwitz's blue death stamps added another layer to Jewish aversion to tattooing, which many orthodox rabbis forbid because it alters the human body as a divine creation.

Yet Lewy is a respected expert within the field — and a fierce critic of what he calls today's "commercialization" of an important aspect of cultural history that stretches from Jerusalem to Japan.

Tattoos "can symbolize a social rank, identify ethnic affiliation, indicate experience of religious pilgrimage or of a rite of passage," he told the two-day conference that ended Tuesday. "They can also be a sign of rebellion or diversity."

The conference, held at the Vatican's Pontifical Urbaniana University, just up the hill from St. Peter's Square, marked the first of its kind and participants marveled that it came together at all given that the study of tattooing is a relatively new field of serious academic research.

"I was gobsmacked," said Oxford historian Jane Caplan, who wrote a seminal anthology on tattoos in U.S. and European history. "It seemed so unlikely," particularly Levy's guiding hand in helping organize a tattoo conference at the Vatican.

The presentations gave an eye-opening look at the wide-ranging use of tattooing over time. Luc Renaut of the University of Poitiers spoke of the tattoos on mummies unearthed in Egypt, saying they had probably been married to Nubian chiefs or high-ranking officials and were "living trophies" that increased the chief's prestige.

Warriors of the 11th century First Crusade branded crosses on their foreheads or shoulders before going into battle to show divine support for their mission. Mystics over time have claimed the "stigmata" — the wounds that imitate Christ's wounds from his crucifixion.

And even today, many players of New Zealand's All Blacks rugby team sport the traditional tattoos of the country's Maori indigenous peoples, said Sean Mallon, senior curator of Pacific culture at the Museum of New Zealand.

"It's a tangible way of expressing the past," he said.

"There are a lot of tattoos here," he whispered pointing to conference participants and admitting his back was covered with them. "They're just not visible."

Lewy first became interested in the history of tattoos when he was posted in Sweden and began reading travel logs of Swedes who had gone to the Holy Land in the 17th century, returning with tattoos they had acquired in Jerusalem as a mark of their pilgrimage.

He displayed textile blocks with images of saints engraved in them that he said were used to stamp the tattoo image onto the skin; the tattoo artist then traced the lines of the design with a needle, pricking the skin to draw blood; an ink-soaked cloth was then wrapped around the wound so that the pigmentation seeped into the cuts, leaving a permanent stain.

Despite his painstaking research, Lewy acknowledged much remains unknown about early tattoos since they "disappear from historical memory once the skin is buried with its owner."