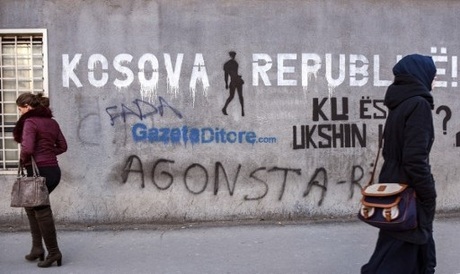 Kosovo, Europe's youngest state, turns nine on Friday, but 24-year-old Nazim Ahmeti is in no mood to celebrate.

"Day after day I must fight just to provide a piece of bread for my child and my wife," says Ahmeti, who like 60 percent of young people in the tiny Balkan state is unemployed.

Like others, he defies extreme cold as he waits for hours outside Pristina's vegetable market in hopes of being hired for a day's work that might earn a meager 15 euros ($16).

Kosovo unilaterally declared independence from Serbia in 2008 and since has been recognized as a state by more than 110 countries, despite Belgrade's fierce opposition.

In spite of its diplomatic success, the former southern Serbian province is scarred by poverty and corruption.

But people believe this is a vast underestimate. World Bank data shows average unemployment at 42.6 percent over the last four years.

A third of Kosovo's 1.8 million people meanwhile live below the poverty line and the average monthly salary is 360 euros -- less than a quarter of monthly wages in the European Union, which Kosovo hopes one day to join.

The 1998-1999 conflict between Serbian security forces and Kosovo Albanian guerrillas that was ended by a NATO air campaign claimed 13,500 lives, most of them ethnic Albanians.

So analysts believe it is more than radical Islamism that is to blame for some 300 Kosovo Albanians joining jihadists in Syria and Iraq.

The same dire poverty and lack of economic progress have also pushed youngsters to emigrate to western Europe, more often illegally than legally.

In fact Kosovo's population has shrunk to 1.87 million from an estimated 2.1 million in 2008, and a key subject of talk recently has been winning visa liberalization to ease travel to the European Union countries.

"Just look at their faces. There is not a single smile," said political analyst Ramush Tahiri, pointing to a crowd of youngsters at the main Mother Teresa square in central Pristina.

"None of their dreams has come true," he said.

Kosovo must provide "an economic perspective to its citizens in order to make them stay here, to prevent the social and other crises that made them look for solutions outside Kosovo," Prime Minister Isa Mustafa told AFP.

He said his government was doing its best to attract foreign investment.

But an editorial in the leading Koha Ditore daily said that "the government has not even come close to meeting the expectations of the young."

Normalizing ties with Serbia appears to be a necessary step.

Talks between the two that have been underway since 2011 are slowly progressing although tensions return from time to time.

Despite strained relations, Kosovars and Serbs have never stopped trading.

Excluding allegedly significant amounts of smuggled goods, Serbia in 2016 exported some 400 million euros of goods to Kosovo, notably food, while tiny Kosovo exported 40 million euros worth -- or four million more than to its big brother Albania.

Another obstacle to development is endemic graft. Kosovo is ranked 95 of 175 countries on the 2016 corruption perception index list of Transparency International.

"The fact that the elite is abnormally rich shows that economic development has not been their priority," he added.

But Ahmeti cannot hide his disillusion.

"I did not expect independent Kosovo to become America overnight. But I did expect not to have to worry about having enough bread for my family."