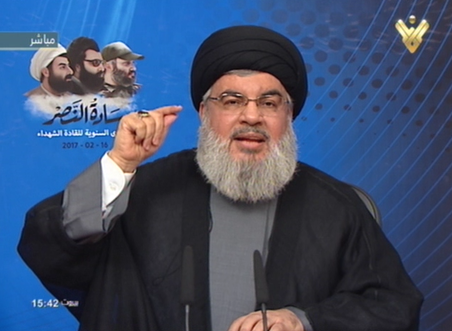 Hizbullah chief Sayyed Hassan Nasrallah on Thursday called on Israel to “dismantle the Dimona nuclear reactor,” warning that it poses a threat to Israel's existence if hit by Hizbullah's missiles in any confrontation.

“Israel is continuing to launch threats against Lebanon and speak of the third Lebanon war and of what it will do during this third war... This intimidation is not new and it seems that there is a permanent Israeli objective to pressure the resistance community in Lebanon, and after (Donald) Trump was elected U.S. president, this intimidation has returned,” said Nasrallah in a televised speech commemorating Hizbullah's slain leaders.

“We've been hearing these threats since the end of the July 2006 war. Every other day we hear statements about the third Lebanon war and about the coming vengeance. The new threats are based on the election of Trump, but the policy of the new American administration in the region is not clear,” Nasrallah added.

“Trump's election does not scare us, even if claims that he will give (Israeli Prime Minister Benjamin) Netanyahu the green light to wage a war on Lebanon turn out to be true, seeing as the issue of war on Lebanon is not hinging on the American permission,” Hizbullah's chief noted.

He also noted that the alleged “Arab cover” that “allowed Israel to attack Lebanon in 2006 is also still present.”

“The issue is not about the U.S. permission or the Arab cover but rather whether or not they will be able to achieve a victory. This is the main question,” Nasrallah pointed out.

He however reassured the Lebanese public opinion that “the strength and firmness of the resistance and President Michel Aoun's unwavering stance will deter Israel from waging any war.”

Commenting on an Israeli court's order that an ammonia container in the northern city of Haifa be emptied of its toxic content, Nasrallah also advised Israel to "dismantle the Dimona nuclear reactor," warning that it poses a threat to Israel's very existence if hit by his group's missiles.

And questioning Israel's ability to send ground troops into Lebanon in any future war, Nasrallah stressed that “aerial war alone cannot decide the fate of the battle and cannot achieve victory.”

“Had it not been for the Syrian army's fighting on the ground in Syria, it would not have been able to achieve decisive victory,” he noted.

Nasrallah added: “The resistance must remain prepared and ready and the enemy understands this because this is what's deterring it.”

“I tell the enemy's leaders that they would be mistaken if they think that they have enough information about the resistance, seeing as we always have hidden surprises, which is part of our strategy and military creed,” Nasrallah warned.

the day this iranian sectarian terrorist is brutally murdered is the day we celebrate our independence.

Your hero Trump is not as intimidating, as you his fans would think.
He never fought in a war his whole life, and he made draft evasion, when being called upon to fight in the Vietnam war.

A man that was born with a golden spoon in his mouth, that is not someone to be feared, just like the Saudis waging war in Yemen, they are rich but they think their money can buy them victory.

Well the Ansarullah live on war, they thrive on Resistance just like Hezbollah so how do you expect to win against such groups?

You zionists and Saudis are not the masters of this region, you are nothing without America.

Hopefully you will have the chance to show

Ya Ashruf Al Nass! Haters you may commence :)

i can assure you on the tomb of my son hadi and on the integrity of zeynib and the conscience of imamu ali that we are here to protect lebanon and not the shias or Iran.

Love the hate of the Israeli defense trolls on this site :D

I don't know why I respect Hezbollah Chief Sayyed Hassan Nassrallah; I just do.

The strength and firmness of the resistance and President Michel Aoun's unwavering stance will deter Israel from waging any war...

but what guarantees this does not happen again

stop your delusional threats. You, your divine weapons and men, Iran and its revolutionary guards, the regime forces, and over 100,000 shia afghanis, iraqis and pakistanis were on the brink of defeat after 5 years of divine victories in Syria. Just ask Lavrov when he said a month ago " Damascus would have fallen in 2 weeks had we not intervened"

someone feels addressed.... why!? Sayed was forwarding his speech toward Daesh and the zonists.

btw, for your mental confusion, the only ones who defeated ISIS are the Syrian govt troops along with the resistance, Russia's help is pushing for early victory over your cousins.

hehe Lavrov was lying when he made that statement according to the heretic from southern iran:)

I remember certain Arabs, even Lebanese, cheering when Israel bombed all over Lebanon in 2006. Every means is fine for them as long as Hezbollah is weakened. This will never be forgotten, and they will never be trusted.

good memory u have

Yet they whine, because the Resistance went to Syria to destroy the Gulfs allies in 2013.
As if we started it all, they started it themselves.

How many minorities lives in rebel areas in Syria?
How many sunnis lives in Damascus and other Assad government areas?

The Syrian Government under Assad opened their borders for the refugees in 2006.

So stop acting as if the Gulf did anything. Mostaqbal even wished for the Israelis to finish us all off, but all that has been forgiven so far.

contradicts itself in the same sentence.;)

Read the speech, read the comments, now I understand why my parents left Lebanon during the war without ever returning. It is because the war never ended! People didn't get justice and the criminals are still roaming freely and now have their own propaganda tv stations.

Sheesh, I can't see the comments for all the spam.

I hope they get you soon!

If all those who hate your turbanheadded thug are Israelis FT, then at least half of your Lebanese fellows are! Should you be Lebanese and not Iranian that is!

This coward hides behind the foolish people who support him- Israel can wipe them out in an instant if it wanted to- it will take everyone else that lives in that area with it, and that is what they get for supporting this Iranian backed stooge.

But I thought Israel and Hezbollah were secret allies?

That's what your friends on Naharnet repeat over and over anyway.

BS from the BS merchant. If anything, the Trump election is focusing Israeli expansion energy eastward into the West Bank, not northward into Lebanon. Nasrallah is a warmonger trying to talk up a war that does not exist.