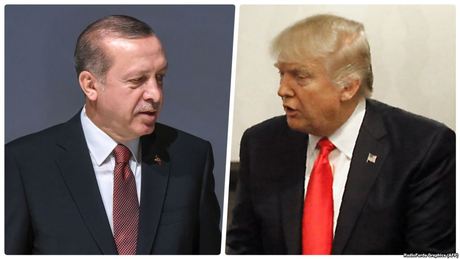 Turning a blind eye to multiple policy differences, Turkey is seeking a tighter alliance with Washington under President Donald Trump but the road to a rapprochement may not be easy.

President Recep Tayyip Erdogan's relationship with the White House worsened drastically in the final months of the Barack Obama administration, mired in rows on issues from Syria to the extradition of the  preacher Fethullah Gulen, the Turkish leader's arch-foe.

But Turkish officials repeated none of the gloom that some EU leaders expressed after Trump's election, instead hoping that he would open a new page in relations.

Trump's administration has a "good opportunity to make bold moves" in his foreign policy after the previous administration's "disregardful" attitude, Ayse Sozen Usluer, head of international relations at the Turkish presidency, told AFP.

She added the new administration would assess anew its relationship with Turkey regarding trade, military, the fight against terror among other issues and "take new steps to improve relations."

So could a potential bromance now be brewing between two men who have made macho politics a trademark?

Less than 48 hours after Trump and Erdogan had their first conversation of the new U.S. president's term, new CIA chief Mike Pompeo came to Ankara last week to meet the Turkish leadership in his first foreign visit.

In a sign of the importance of realpolitik in the relationship, Pompeo had only last year described Turkey as a "totalitarian Islamist dictatorship" in a now deleted tweet.

But for all the good intentions, analysts believe it is doubtful the two sides will progress much beyond a honeymoon period before traditional disagreements reappear.

Ankara hopes Trump is "the man who can deliver (a rapprochement) to them, so they're quite obviously withholding any criticism of him even though his rhetoric in multiple cases is completely against everything they stood for," said Aaron Stein, resident fellow of the Atlantic Council's Rafik Hariri Center for the Middle East.

"I'm not sure that the Trump administration is hearing them yet," he told AFP.

Keen not to disturb the relationship in its early days, Erdogan stayed unusually quiet over Trump's attempt to bar entry to nationals from seven predominantly Muslim countries.

Erdogan regards himself as a champion in the battle against Islamophobia and has also not criticized Trump's repeated use of the phrase "radical Islamic terrorism."

Yet when German Chancellor Angela Merkel came to Ankara and used the expression "Islamist terrorism", Erdogan swiftly rebuked her.

Well-connected Turkish columnist Abdulkadir Selvi wrote Ankara wanted good start with the Trump administration "but at the same time, it is cautious."

"This current love affair is short-term, tactical and ad-hoc," he told AFP.

One key issue is whether Trump continues the Obama policy of supporting the Kurdish Democratic Union Party (PYD) and its armed wing, the Kurdish Peoples' Protection Units (YPG), as the best fighting force on the ground against IS in Syria.

Turkey views the PYD and YPG as sister groups of the outlawed Kurdistan Workers' Party (PKK) which has waged a bloody insurgency against the Turkish state since 1984.

Turkey has repeatedly floated the idea of a joint operation to capture the IS de-facto capital of Raqa in Syria but insisted the Kurdish militia are not involved.

Meanwhile the shadow also lurks of Gulen, who has lived in self-imposed exile in Pennsylvania since 1999 and Turkey accuses of ordering a July 15 failed putsch.

Gulen strongly denies the charges but Ankara has repeatedly called for him to be extradited.

Prime Minister Binali Yildirim discussed the issue with U.S. Vice President Mike Pence on Saturday after the men met on the sidelines of the Munich security conference.

Erdogan's spokesman Ibrahim Kalin said the Trump administration was taking the Gulen issue "more seriously" although there has yet to be a clear sign in Washington of a change in attitude.

Stein said although Trump would not be able to extradite Gulen as it is handled by the U.S. justice department, the Turks wanted "more pressure" on the Muslim cleric.

Hakura of Chatham House said Turkey's key conditions -- the extradition of Gulen and Washington ceasing all cooperation with the YPG -- were unlikely to be met in the medium or long term.

"The greater likelihood is a rupture in relations... rather than a continuation of the current pantomime."