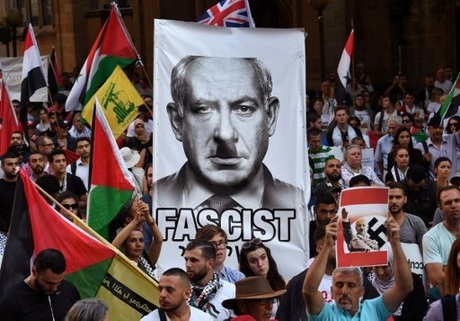 Several hundred pro-Palestinian protesters demonstrated in Sydney on Thursday against the first visit to Australia by an Israeli prime minister, branding Benjamin Netanyahu a "war criminal".

A police helicopter hovered over the city as speakers slammed Canberra's strong support of Netanyahu and his government.

"We are here to oppose Australia's support for Israel, for a racist apartheid nation," pro-Palestinian author and Australian lawyer Randa Abdel-Fattah told AFP.

"It's disgusting to see that some of our Australian leaders have rolled out the red carpet and welcomed a war criminal into Australia," she said.

"But there are so many Australians who are against this and we are raising our voices loudly and clearly today, to say (Prime Minister) Malcolm Turnbull, and (Foreign Minister) Julie Bishop, 'not in our name'," she added.

A large banner was unfurled depicting Netanyahu with a moustache as Hitler and the word "Fascist" written underneath.

Pro-Israel supporters were also on the streets and The Australian newspaper reported that riot squad officers removed a man who approached the crowd shouting "long live Israel".

The demonstrators, organised by the local Palestine Action Group, tried to march on Netanyahu's hotel but were cut off by police well short of the city centre building over looking the harbour.

Ahead of Netanyahu's arrival Wednesday, some 60 business leaders, academics, members of the clergy and former politicians signed a letter  saying Australia should not welcome Netanyahu, claiming his policies "provoke, intimidate and oppress" the Palestinians.

the terrorist Natanyahu must have been treated equally.