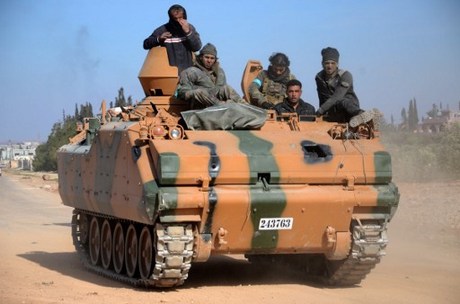 Turkish-backed rebels Wednesday seized two villages from U.S.-supported forces led by Kurdish fighters as they sought to expand their control in northern Syria, rebels and a monitor said.

The rebels advanced east from the town of Al-Bab, which they captured last week from the Islamic State (IS) jihadist group, into territory controlled by the Syrian Democratic Forces.

The SDF is dominated by the Kurdish People's Protection Units (YPG), which Ankara considers a "terrorist" organization.

Syrian rebels "captured the villages of Tal Turin and Qara east of Al-Bab after violent clashes with the separatist YPG militia," according to a statement issued by Hiwar Kallis, a rebel faction.

Hiwar Kallis is a member of the Turkish-backed Euphrates Shield campaign, which is in control of swathes of territory in Aleppo province, near Syria's northern border.

A top U.S. general, meanwhile, said Russian warplanes on Tuesday bombed American-backed fighters in several small villages near Al-Bab after they mistakenly thought IS forces were in the area.

"We had some Russian aircraft and regime aircraft bomb some villages that I believe they thought were held by ISIS (IS), yet... actually on the ground were some of our Syrian Arab Coalition forces," Lieutenant General Stephen Townsend told reporters in a video call from Baghdad.

Control of Aleppo province is divided between a myriad of armed groups -- rebels, jihadists, Kurdish militia and Syrian government forces.

After capturing Al-Bab last Thursday, the rebels' only front lines were with the SDF and Syrian government forces.

Turkish President Recep Tayyip Erdogan said Monday that the next target after Al-Bab would be Manbij -- a former bastion of IS that is now under the control of the U.S.-backed SDF.

"Euphrates Shield attacked our forces today, and the clashes are ongoing," said Sherfan Darwish, spokesman for the Manbij Military Council which is part of the SDF.

The Syrian Observatory for Human Rights also confirmed that Euphrates Shield fighters had captured the two villages near Al-Bab.

Turkey has also set it sights on Raqa, the de facto Syrian capital of IS' so-called "caliphate."

Turkish Defense Minister Fikri Isik said Ankara is prepared to join an international coalition to take the IS fiefdom but only if the YPG are not involved.

And so it begins. The Kurds can only rely on the Syrian government now, the only faction that doesn't want to exterminate them.