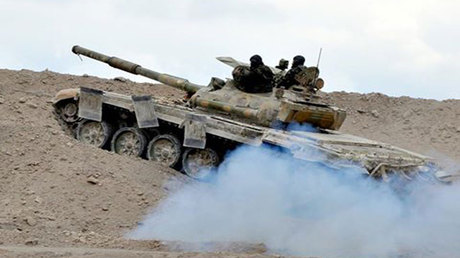 "The army has entered a western neighborhood of Palmyra and has seized control of part of it" from IS, Rami Abdel Rahman, head of the Syrian Observatory for Human Rights, told AFP.

"There are clashes and heavy shelling" across the historic city, where control has changed hands repeatedly over the past two years, said the monitoring group's chief.

Abdel Rahman said earlier that Syrian forces, backed by Russian soldiers, had captured a string of hilltops overlooking Palmyra, bringing them within firing range of its western half.

"They are close to capturing the citadel. IS withdrew from it, but they may have left suicide bombers inside," he said.

Supported by Russian air strikes and ground troops, government forces have been battling for weeks through the desert in the central province of Homs to reach Palmyra.

IS jihadists first seized Palmyra in May 2015 and began to systematically destroy the city's monuments and temples, while also looting its many archeological treasures.

They were driven out in March 2016 but recaptured the town last December.

"Seizing control of Mount Hilal and other hilltops overlooking Palmyra is an important step towards the collapse of the terrorist groups in the city," state news agency SANA said.

And a senior military source in Damascus told AFP earlier on Wednesday that the army had also reached a strategic crossroads leading into Palmyra.

"This crossroads is the key to entering the city," the source told AFP.

IS has ravaged the city's celebrated heritage, blowing up funerary towers and carrying out mass executions in the city's Roman theater.

The new destruction was condemned by the United Nations as a "war crime."

On Wednesday, two funeral busts damaged by IS after it first captured Palmyra were brought back to Syria after being restored in Italy.

The two busts, recovered by Syrian troops, had been badly disfigured with what appeared to be hammer blows.

Modern technology -- including a 3-D printer -- was used in the restoration of the busts which date to the second and third centuries and had been transferred to Rome via Lebanon.

On another front in the multi-pronged battle against IS, Turkish-backed rebels Wednesday seized two northern villages in Aleppo province from U.S.-supported forces led by Kurdish fighters, rebels and the Observatory said.

The rebels advanced east of Al-Bab, which they captured last week from IS, into territory held by the Syrian Democratic Forces, which is dominated by the Kurdish People's Protection Units (YPG) that Ankara considers a "terrorist" organization.

Rebels said they "captured the villages of Tal Turin and Qara... after violent clashes" with the YPG.

A top U.S. general, meanwhile, said Russian warplanes on Tuesday bombed American-backed fighters in several small villages near Al-Bab after they mistakenly thought IS forces were in the area.

"We had some Russian aircraft and regime aircraft bomb some villages that I believe they thought were held by ISIS (IS), yet... actually on the ground were some of our Syrian Arab Coalition forces," Lieutenant General Stephen Townsend told reporters in a video call from Baghdad.

Control of Aleppo province is divided between a myriad of armed groups -- rebels, jihadists, Kurdish militia and Syrian government forces.

For the 5th time! Mdr. Will Putin send his red army choir again for a live broadcast?

not the 5th but the 50th time you said thank you Souria; irani devil worshiper.

FT is the most informative poster on naharnet by a country mile. He brings traffic and readership to the forum because of his intellect and acumen.

@flametroller
are you commenting on the article or are you harassing the readers?
frankly, you should get sanctioned for this (:

You're wrong. I'm not Terro. So much imagination but so little creation!

Mabrouk Souria, and congrats to the SAA, may the hasbara and takfiri trolls choke on this new victory

the iranian heretic calls others 'takfiris'.... the irony!

You do the hokey pokey
and you turn yourself around
That what it's all about.

Let's get Syrian history out of Wahhabi hands.

and let's put it in your capable wilayat al faqih hands.

It's alright, Terror/Texas. It's not your fault you suffer from Tourette's Syndrome.