ICRC Strongly Condemns Use of 'Chemical Weapons' around Mosul 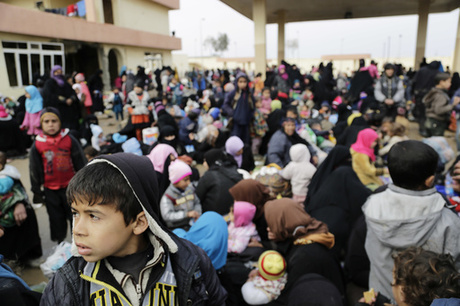 Chemical weapons have been used during fighting around the Iraqi city of Mosul, the International Committee of the Red Cross (ICRC) announced on Friday, condemning the alleged attacks “in the strongest possible terms.”

“Seven patients with symptoms consistent with an exposure to a toxic chemical agent are currently being treated at Rozhawa hospital, close to Mosul, where fighting is ongoing. ICRC medical teams at the hospital are offering full support to the local medical teams,” the ICRC said in a statement.

“During the past two days, the hospital has admitted five children and two women showing clinical symptoms consistent with an exposure to a blistering chemical agent,” said the ICRC’s Regional Director for the Middle East, Robert Mardini.

The symptoms of the patients admitted at Rozhawa hospital include “blisters, redness in the eyes, irritation, vomiting, and coughing,” ICRC said.

ICRC medical teams working in hospitals around Mosul have trained staff on how to decontaminate and treat patients exposed to chemical agents, the committee added, noting that special medical kits have also been provided.

“The ICRC teams are working closely with the relevant medical authorities and the World Health Organization (WHO) to be prepared for any more such cases,” it said.

I guess the blame-game is off, as long as Syria can't be implicated...

Un Damascus Ghouta suburbs, the evidence is overwhelming that it was the regime who used chemical weapons killing close to 1000 civilians

Why would they lie about an attack they haven't even blamed anyone for?