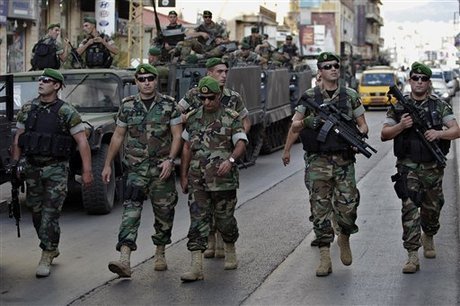 Lebanon's security apparatuses have launched a wide security operation to hunt down the most wanted fugitives of drug traffickers, kidnap gangs and outlaws in Hizbullah's strongholds in Beirut's southern suburbs (Dahiyeh) and the Bekaa valley, al-Akhbar daily reported on Friday.

Security sources who spoke on condition of anonymity said a decision has been taken to “restore the State's standing in the said areas,” said the daily.

Hizbullah has come to realize that outspread of chaos in areas under its control are wearing away its social environment. Based on that, a decision has been taken to restore the State's control to Hizbullah's strongholds, where a series of security operations succeeded at seizing some of the most wanted fugitives, it reported.

Previous “pre-announced” security plans executed under a “consensual agreement” have failed to achieve the needed results. Today, the operation launched by security apparatuses for more than a month, have intensified recently based on a principle “no security by mutual consent and no cover for anyone,” said al-Akhbar.

Security raids in Baalbek's Hay al-Sharawneh last week which targeted a residence of the most wanted fugitive and druglord Nouh Zoaiter, came in that context. Although the raid did not reap an arrest, but the “operation in itself is a clear message that no fugitive will be spared,” said the newspaper.

Raid operations, mainly in Dahiyeh and Baalbek, have kicked off a month ago and are carried out almost on a daily basis.

The sources confirmed that they were able to break “security squares” controlled by the most wanted fugitives in the areas of al-Laylaki and Hay al-Joura, describing the overall arrests since February as “motivating and include big names.”

The most prominent arrests include Aa. Shams, a man accused in a homicide crime against two young men of the Ghandour and Qabalan families back in 2007.

More than ten gang leaders who used to compel people into paying sums of money for personal interests in Dahiyeh were arrested, one of them had possessed what was worth four million dollars of heroin.

The sources assured saying “many more will be soon detained. The daily raids will not stop in Dahiyeh and all regions in North Bekaa, Hermel, al-Qasr and al-Shawagir,” asserting “positive results of the campaign will be seen in weeks.”

So why isn't the hidden terrorist Nasrala under arrest?

Because this is LEBANON not Isrhell you Zoinist/Wahhabi loving troll

because this is iranian territory owned and operated by wilayat al faqih.

Thumbtheresistance4.0 less than a minute
Because this is LEBANON not Isrhell you Zoinist/Wahhabi loving troll

4.0 (you IQ I presume)... you forgot that we also love ISIS, Talibans, Extra terrestrials and the Power Rangers!

Wanted fugitives! Drug traffickers! Kidnap gangs! Outlaws! ... In Dahie!!!
Impossible!
There are only Saints in Dahie!

That's fine, drug dealers should be hunted down everywhere.

Is this the 20th security plan for dahieh and the shia iranian parts of lebanon?

Hahaha what kidders Akhbar are, but April first is not for 8 days.

And they've been harbored there specifically by whom? Why now suddenly? Nothing will happen, it's a source of Iran's income. Notice Israel and Iran both have similar tactics?