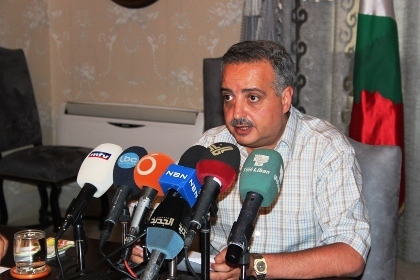 Minister of the Displaced Talal Arslan condemned on Monday a dispute that erupted between supporters of the Progressive Socialist Party and Hizbullah over raising party flags in the Choueifat area and stressed that his party adheres to civil peace.

Lebanese Democratic Party leader, Arslan stressed that “all political parties have condemned the incident,” assuring that political “cover will not be provided for anyone who plans to involve the Mountain area in sedition.”

He pointed out in a press conference that it has been “agreed to remove all partisan slogans,” in the area.

Leader of the Democratic Gathering party MP Walid Jumblat and Hizbullah want to know what happened, said Arslan, as he called for lifting political cover off the perpetrators.

“We are committed to civil peace. Cover should be lifted off all those who try to fish in troubled waters and to drag the sons of the Mountain and Choueifat into discord,” said Arslan.

Dispute erupted in Choueifat on Sunday when Hizbullah supporters raised party flags in the area, after which supporters of the PSP instantly removed placing their own flags.

An army patrol ended the dispute and removed all party slogans after dispersing the crowds.

What is it with the people from the dahya and putting up flags and pictures? Its like seeing girls who love Justin Bieber. Labayka ya Bieber labyaka ya Justin.

I have the utmost respect and admiration for Lebanese Democratic Party leader, Mr. Tala Arslan who also happens to be Minister of the Displaced for his love of democratic practices and adherence to cvil peace.