'All Evidence' Points to Assad, Says UK on Idlib Attack 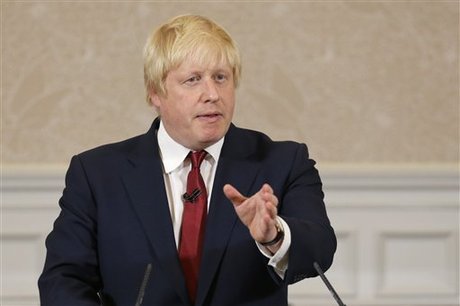 "All the evidence I have seen suggests this was the Assad regime... using illegal weapons on their own people," Johnson said as he arrived for a Syria aid conference in Brussels.

"What it confirms to everybody is that this is a barbaric regime which has made it impossible for us to imagine them (having) authority over Syria after this conflict," he added.

The Brussels conference, co-chaired by the EU and U.N., is a follow up to last year's London meeting which raised $11 billion (10 billion euros) for humanitarian aid programs in the devastated country.

It is also meant to support U.N.-sponsored peace talks in Geneva where mediator Staffan de Mistura has reported some very modest progress in solving a conflict which has claimed more than 320,000 lives and displaced most of the Syrian population.

Assad's future role is a key sticking point -- the rebels and their international backers demand that he must step down.

But Assad refuses to budge and his key ally in Moscow has backed him to the hilt against the rebels and shows no sign of changing tack.

EU foreign affairs chief Federica Mogherini urged the international community to press ahead with the peace talks, which were made even more urgent after Tuesday's suspected chemical weapons attack.

"We need to give a push, a strong push to the political talks in Geneva. We have to unite the international community behind these negotiations," Mogherini said.

So what evidence is that? Claims from some guy who lives in London? Conveniently close, even!

1/ why would the syrians bomb a depot knowing it contains chemicals as the russians claim? they know that the chemicals would spread around and kill...

or 2/ if the regime bombed with chemicals it will result the same.

SO in both cases he knew he would spread horror with hezbi lovers full approval ...!!!

and you take your info from where?

and here is another expert on the matter who knows better, right?
who, msf are all ignorants right?
assad never knew that bombing a depot of toxic susbtances (according to the russians and your propaaganda) would dissipate them in the air killing everyone around right? once again you are the victim here rofl