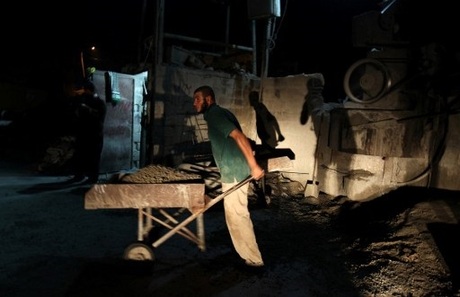 The Gaza Strip's only functioning power plant was out of action Sunday after running out of fuel, the head of the territory's electricity provider told AFP.

Samir Metir said that all the plant's fuel, purchased with funding from Qatar and Turkey, had been used up.

He said it was not clear when the Palestinian territory would receive more, owing to a "dispute" between the electricity authority in Gaza and Palestinian authorities in the West Bank.

The Islamist Hamas movement seized power in Gaza in 2007 from the Ramallah-based Fatah organization of Palestinian president Mahmud Abbas.

A mooted power-sharing agreement in the Strip has failed to materialize, and Gaza residents have been subjected to a decade-long Israeli blockade severely limiting supplies.

Fuel supply for the Strip's two million inhabitants has been a long-running source of dispute, with most homes in Gaza receiving two eight-hour periods of electricity a day even when the plant is operating normally.

Protests broke out in January over the power shortages, which the Gaza health ministry warned could have "dangerous consequences" for patients.

As things stand, residents can expect two six-hour periods of electricity, Metir said, "including electricity bought from Israel and Egypt."

"subjected to a decade-long Israeli blockade severely limiting supplies."
What utter nonsense.
If Hamas paid the PA as it should there would be enough fuel coming in to supply all of Gazas electricity needs for 24 hours a day.
This argument between the Hamas and the PA has nothing to do with Israel.

Lebanon and Syria have imposed a blockade against Israel since 1948.