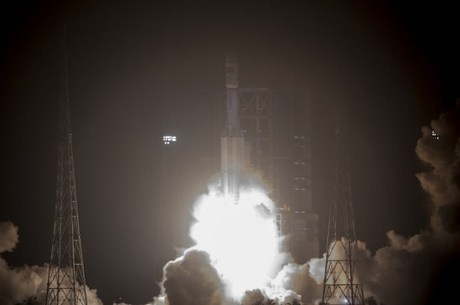 Hundreds of spectators who had been waiting to observe the launch since the afternoon cheered and clapped in the stands.

Journalists and local hobbyists with long-range zoom lenses snapped photos of the rocket as it made its swift ascent.

Tianzhou-1, the first cargo spacecraft developed by China, is headed to dock with the orbiting Tiangong-2 space lab, which was launched last September.

The cargo ship is a "crucial step" toward China's goal of completing its own crewed space station by 2022, according to the official Xinhua news agency.

The tube-like craft measures 10.6 meters in length and can carry over six tonnes of cargo as well as satellites, Xinhua said.

It will also conduct experiments in space, including one on non-Newtonian gravitation, before falling back to Earth, Xinhua said.

Beijing sees its multi-billion-dollar space program as a symbol of its rise and the Communist Party's success in turning around the fortunes of the once poverty-stricken nation.

In 2011, the U.S. Congress ruled that Chinese astronauts would not be allowed on the International Space Station because of national security concerns.