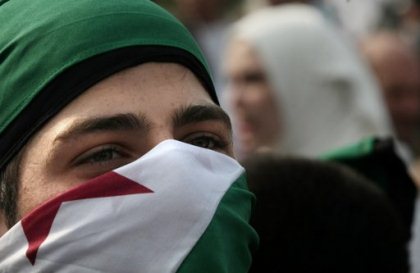 Activists called a general strike on Sunday to step up the pressure on Syrian President Bashar Assad's regime as fears grew of an "invasion" of the besieged protest hub of Homs.

In a civil disobedience campaign, anti-regime protesters were organizing sit-ins, the closure of shops and universities, and the strike.

The Local Coordination Committees, which organizes protests on the ground in Syria, has predicted the campaign would snowball, and said the strike was "the first step in an overall civil disobedience" campaign to overthrow the regime.

But the opposition Syrian National Council and activists have warned of a looming bloody final assault on the city of Homs in central Syria.

Witnesses in Homs, besieged by government troops, have reported a buildup of troops and pro-regime "shabiha" militiamen in armored vehicles who have set up more than 60 checkpoints, the SNC said.

The Syrian Observatory for Human Rights warned of "inhabitants' fears of a large invasion of the city," in a statement issued on Saturday.

"The arrival of hundreds of armored vehicles to the city of Homs during the last two weeks estimated, according to witnesses," to number more than 200, the Britain-based rights watchdog said in the English-language statement.

"The spread of security leaks that the regime decided to extinguish the revolution in Homs within 72 hours by giving the security forces and Shabiha (militia) unlimited powers to not be merciful towards the unarmed civilians."

The United States, France and Britain have all warned Damascus against any bloody assault on Homs and said the regime would be held responsible for any heavy loss of life.

The bloodshed, meanwhile, continues to claim more lives, with activists reporting more than 50 deaths since Friday when the Observatory said at least 41 civilians, including seven children, were shot dead by security forces.

The Damascus region and Homs paid the heaviest price.

And at least 14 civilians were reported killed Saturday, including four hit when security forces fired live ammunition and tear gas at mourners in Maaret al-Numan in Idlib province and three others hit by "machinegun fire in Hama."

U.N. Human Rights Commissioner Navi Pillay has said more than 4,000 people have been killed in the government crackdown on dissent in Syria since the anti-regime protest movement broke out in March.

Pillay is to brief the U.N. Security Council on Syria and the wider Middle East at a meeting on Monday.

Assad refuses to let investigators from two U.N. human rights inquiries enter Syria and is resisting Arab League calls to accept monitors despite being hit by regional sanctions on top of US and EU measures.

Syria, which blames the violence on armed "terrorist" gangs, wants the bloc to lift sanctions in return for allowing in observers.

A League official said Arab foreign ministers will hold an emergency session on Syria by the end of the week in Cairo, following a smaller meeting of a ministerial task force.