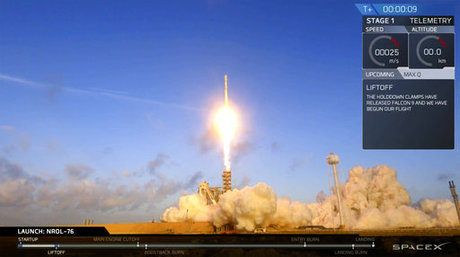 SpaceX has launched a top-secret spy satellite for the U.S. government.

The unmanned Falcon 9 rocket lifted off Monday morning from its NASA-leased pad at Kennedy Space Center in Florida. It hoisted a classified satellite for the National Reconnaissance Office.

Several minutes into the flight, the first stage booster — its job done — aimed for a touchdown at Cape Canaveral Air Force Station. SpaceX strives to return most of its first-stage boosters for reuse.

This was the fourth SpaceX booster landing at Cape Canaveral; even more have landed on an ocean platform. Sonic booms, as usual, rattled the area around the launch site.

Sunday's launch attempt was foiled at the last minute by a bad sensor.