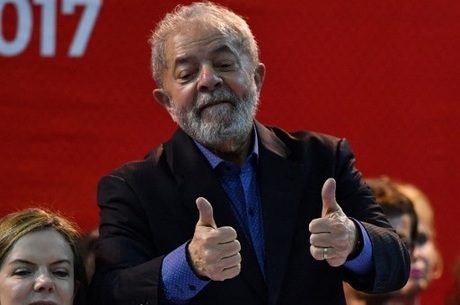 Brazil's former leftist president Luiz Inacio Lula da Silva, backed by hundreds of red-shirted supporters, was due in court Wednesday for a corruption trial that could end his storied career.

Lula, 71, is accused of receiving a seaside apartment as a bribe in a much wider corruption scheme investigated by the so-called "Car Wash" probe upending Brazilian politics.

He says the charges are trumped up to stop him seeking reelection in 2018. His passionate supporters gathering in the southern city of Curitiba agree.

Wearing the Workers' Party red color and waving red flags, hundreds of people came in on scores of buses from around the country to back Lula ahead of his hearing with senior "Car Wash" Judge Sergio Moro.

"Lula is a victim of a deeply erroneous judicial procedure," said Ralph Moreira, 60, a lawyer who joined a pro-Lula protest camp set up in Curitiba. "We came to back up the rural workers who are strengthening the fight for democracy."

There were high-profile allies of the beleaguered former president too. Workers' Party Senator Humberto Costa flew in Tuesday and Lula's successor in the presidency, Dilma Rousseff, was due in on Wednesday, a spokesman said.

Lula, 71, became an icon of Latin America's left during a 2003-2010 presidency that saw Brazil enjoy a commodities-fueled boom and tens of millions of people lifted out of severe poverty.

But now facing a total of five corruption trials, he is fighting for his future.

The fiery, bearded orator who rose from great hardship to found the Workers' Party and lead Brazil, is already one of the most famous people in the country.

Moro, a quiet, intense 44-year-old legal high-flier, is rapidly catching up. As the face of the "Car Wash" probe that has gripped Brazil for more than two years, Moro is a hero to many.

Now, Moro is weighing allegations that Lula accepted a luxury seaside apartment near Sao Paulo as a bribe from the OAS construction company.

The apartment and other alleged benefits from OAS are said to have been typical of a vast network of bribery uncovered by "Car Wash," with major companies paying politicians to obtain influence with lawmakers and secure big deals with the Petrobras state oil company.

Already, senators, former ministers and the once seemingly untouchable speaker of the lower house of Congress, Eduardo Cunha, have been arrested or convicted, while scores more high-flying politicians face probes.

If Lula is found guilty when Moro hands down his verdict in an estimated 45 to 60 days, and then loses an appeal, he'd be barred from running for office again and face prison.

David Fleischer, professor emeritus at the University of Brasilia, said Moro has shown he is not afraid to prosecute the powerful.

"What's going to be important to see is how Lula answers the questions the judge poses," Fleischer said. "It will be a very interesting face-to-face interrogation."

Although Lula is a master survivor, Fleischer believes the net is closing around him ahead of the 2018 polls.

"With documentation and hard evidence it will be very hard for Lula to wiggle out from under all these accusations," he said.

Fearful of violence, the authorities are pleading for pro- and anti-Lula demonstrators to stay away and are stepping up security.

"The idea is to make sure there is no contact between the two groups," said Curitiba public safety chief Wagner Mesquita.

Raising pressure on Lula, a judge in Brasilia on Tuesday ordered the suspension of activities by the Lula Institute, a social research body set up by the ex-president, over suspicions it was linked to criminal activity in a separate corruption case.