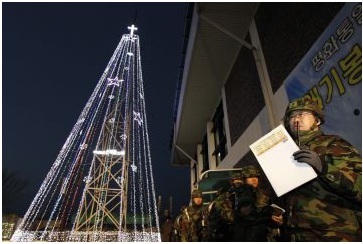 South Korea said Monday it would display Christmas lights near the tense border with communist North Korea despite Pyongyang's threats to retaliate against what it calls psychological warfare.

The defense ministry will allow Seoul church groups to string up the lights on three tree-shaped steel towers atop military-controlled hills near the border, a ministry spokesman told Agence France Presse.

"We've allowed it for the sake of freedom of speech and religion for our people and freedom of religious activities among our troops," the spokesman said, adding the lights will be displayed from December 23 to January 6.

The South's troops will guard the displays against any attacks by the North, he said.

The two Koreas in 2004 reached a deal to halt official-level cross-border propaganda and the South stopped its annual Christmas border illuminations.

But Seoul resumed the display last December after a shelling attack by the North on a border island killed four South Koreans the previous month.

The North's official website, Uriminzokkiri, on Sunday called the planned display "a mean attempt at psychological warfare" and threatened unspecified immediate retaliation if the lights are switched on.

The three hills are within three kilometers (two miles) of the border and within range of North Korean gunfire.

The tree-shaped structures, about 30 to 40 meters (99-132 feet) high and illuminated by thousands of small bulbs, can be seen from the North's city of Kaesong just north of the border, according to media reports.

"The enemy warmongers... should be aware that they should be held responsible entirely for any unexpected consequences that may be caused by their scheme," said Uriminzokkiri.

"This issue... is not something to be ignored quietly."

The North has previously accused the South of displaying Christmas lights to spread Christianity among its people and soldiers.

North Korea's constitution provides for religious freedom but the US State Department says this does not exist in practice.