Macron to Host Putin for May 29 Talks on Syria, Ukraine 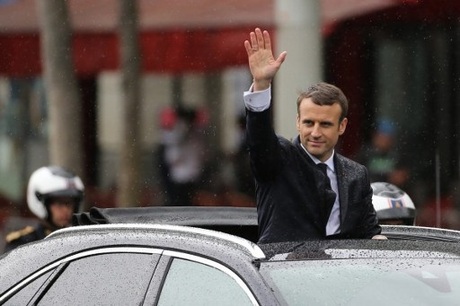 The meeting at the Versailles palace outside Paris will coincide with an exhibition celebrating 300 years of Franco-Russian ties since the visit of Russian tsar Peter the Great to France in 1717.

The visit comes three weeks after Macron's election and seven months after Putin, 64, canceled a trip to Paris for the opening of a Russian cathedral complex near the Eiffel Tower in a spat with then president Francois Hollande.

The Socialist leader had said Russia's bombing of the Syrian city of Aleppo could amount to war crimes.

The Kremlin said in a statement that the two men would discuss combating terrorism and settling the crises in Syria and Ukraine.

"I think he's not very ideological compared with his predecessors," Orlov told a meeting of business leaders. "With him we have more chances of moving forward than before."

Macron, 39, had tough words for Russia during the campaign, saying Moscow was following a "hybrid strategy combining military intimidation and  an information war, (creating) a new state of play on the international level and especially for European security."

The candidate criticized the 2014 annexation of Crimea and "shows of force in Syria or alongside our coastlines and airspaces, (and) the use of social media or state-controlled media to destabilize public opinion."

But he said it was essential to "keep dialogue open with Moscow".

Orlov, in an interview with the French business magazine Challenges, said Syria was "the most burning" bilateral issue.

Macron "seems more determined than Francois Hollande," he said, adding: "We now must go forward in (peace talks in) Geneva where France can play a greater role."

But Francois Heisbourg,  head of the International Institute for Strategic Studies in London, told AFP that Macron seems to "have trouble finding the path to a solution" to the six-year-old Syria crisis while "he hasn't ruled anything out."

During the campaign, Macron vowed to "fully take our country's place in NATO", a pledge he will be expected to underscore when the transatlantic alliance meets in Brussels on Thursday.

"Yes, NATO is useful to Europe's security, notably in the east", he said, adding: "NATO is a defensive alliance; so its role should be to defend us, never to provoke those who look for pretexts to show themselves to be more aggressive than they already are."

Another issue for Macron and Putin is a raft of cyberattacks on Macron's election campaign that his aides have blamed on Russia, accusing the Kremlin of mounting a "smear campaign" against him.

Thousands of emails and documents were dumped online shortly before midnight on the last day of campaigning and were then relayed by anti-secrecy group WikiLeaks.

Paris prosecutors have opened a probe into the attack.