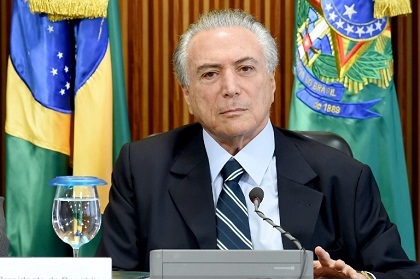 Temer has been hanging by a thread since the revelation of a secret audio clip in which he is allegedly heard giving his blessing to payment of hush money by a meatpacking tycoon to a top politician jailed for corruption.

But starting Tuesday, he faces the separate, more immediate challenge of the Supreme Electoral Tribunal, known as the TSE.

The TSE is deciding whether abuse of power -- principally the use of corrupt campaign money -- fatally undermined the validity of the 2014 election in which Temer was reelected vice president with then president Dilma Rousseff. When Rousseff was impeached last year, Temer took over.

If the TSE judges Temer to have been responsible for abuses in 2014, the court could then annul the election results, throwing Brazil into its second presidential crisis in just over a year.

The session starts in the capital Brasilia Tuesday at 2200 GMT. More sessions are scheduled for 1200 GMT Wednesday, then 1200 GMT and 2200 GMT Thursday.

The verdict will be voted on by the seven-judge panel. But it is possible at any point that the hearing could be adjourned for a lengthy period at the request of one of the judges -- something that would win Temer some badly needed breathing space.

The TSE had previously been considered as something of a sideshow. At most, the court was expected to put the blame for use of dirty campaign money exclusively on Rousseff.

Since the unpopular leftist leader is already out of the picture -- having been judged guilty of breaking government accounting rules in 2016 -- there would be little trauma. Temer, a conservative, would be allowed to finish his mandate through 2018.

However, the eruption of the hush money allegations against Temer have led to hopes among his opponents that the TSE will seize the opportunity to bring him down.

On Sunday, Temer's lawyer Gustavo Guedes claimed that Prosecutor General Rodrigo Janot is leaning on the TSE "to find the president guilty."

The accusation of political interference ramped up the already soaring tension in the capital.

If Temer is convicted, his already weakening grip on power may become untenable.

The election court would decide whether to suspend him immediately or allow him to remain in office pending a final decision.

In theory, he would be able to fight the verdict both in the TSE and at the Supreme Court. But his center-right alliance in Congress would risk collapse.

Even if he survives the TSE, Temer would still face Janot's intensifying corruption probe at the Supreme Court.

Brasilia is swirling with reports that Janot plans to file a request for the Supreme Court to accept formal corruption and obstruction of justice charges soon, triggering a trial.

Janot is also rumored to be in possession of more secret audio recordings and other evidence compromising the president. Adding to that threat is the possibility that further suspects in the corruption scandal will strike plea bargains with prosecutors and testify against Temer.

Chief among those potential new witnesses is a former Temer aide, Rodrigo Rocha Loures, who was caught with a suitcase containing 500,000 reais ($152,000) of alleged bribe money. He was placed under arrest Saturday but has not yet signalled whether he will agree to cooperate with prosecutors.

In the meantime, the economic austerity reforms that Temer has campaigned hard to push through Congress appear increasingly doomed.