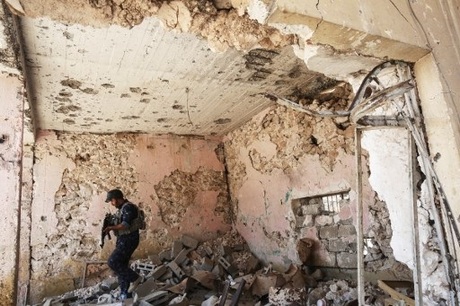 Iraqi forces said Tuesday they were fighting fierce battles with the Islamic State group and rescuing escaping civilians as they pursued their offensive against Mosul's jihadist-held Old City.

Staff Lieutenant General Abdulghani al-Assadi, a senior commander in the Counter-Terrorism Service (CTS), said the battle was proceeding as expected but that progress was slow.

"Things are good and the battle is going as planned," he told AFP.

He said civilians were escaping the Old City, with up to 400 approaching the positions of Iraqi forces on Monday.

Federal police forces said they were moving forward on the southern front of the battle with support from heavy weapons fire and on the northern front had surrounded a hospital.

Iraqi forces launched the operation on Sunday to retake the Old City, the last part of Iraq's second city still held by IS after a months-long offensive.

Commanders say the jihadists are putting up fierce resistance and there are fears for more than 100,000 civilians believed to be trapped in the maze of narrow streets.

Iraqi forces have been inching forward in the face of heavy sniper and mortar fire and booby-traps laid by the jihadists.

On Monday, three French journalists were wounded and Kurdish reporter Bakhtiyar Addad killed in a mine explosion while accompanying Iraqi forces in Mosul.

French public broadcaster France Televisions said Tuesday that one of the wounded journalists, Stephan Villeneuve, had died of his injuries.

The push into Mosul's historic heart on the west bank of the Tigris marks the culmination of a campaign launched in October by Iraqi forces to retake IS' last major urban stronghold in the country.

The U.S.-led coalition battling IS in Iraq and neighboring Syria has backed the offensive, including with months of air strikes.

The loss of Mosul would mark the effective end of the Iraqi portion of the cross-border "caliphate" that IS declared in summer 2014 after seizing swathes of Iraq and Syria.

Earlier this week, Iraqi forces dropped nearly 500,000 leaflets over the city, urging civilians to stay indoors and escape if they can.

They have also stationed Humvees facing the Old City mounted with loudspeakers telling IS fighters: "You have only this choice: surrender or die."

The United Nations has said IS may be holding more than 100,000 civilians as human shields in the Old City.

Commanders have said the fighting is expected to be very difficult and could last weeks.

Surrounded by Iraqi forces on three sides and blocked on the other by the Tigris that runs through Mosul, the jihadists are cornered.

Iraqi forces launched a vast operation to retake Mosul eight months ago, seizing the city's eastern side in January and starting an assault on the west the following month.

It is not clear how many civilians have been killed in the operation, but aid workers are warning that casualties will be high.

Since the start of the battle to retake Mosul, an estimated 862,000 people have been displaced. Around 195,000 have since returned, mainly to the city's east.

It was in the Old City's emblematic al-Nouri mosque in July 2014 that IS chief Abu Bakr al-Baghdadi made his only public appearance.

He urged Muslims worldwide to move to the group's "caliphate" straddling Iraq and Syria.

The jihadists have since lost most of the territory they once controlled in the face of U.S.-backed offensives in Iraq and in Syria, where a Kurdish-Arab alliance is advancing on their last major stronghold Raqa.