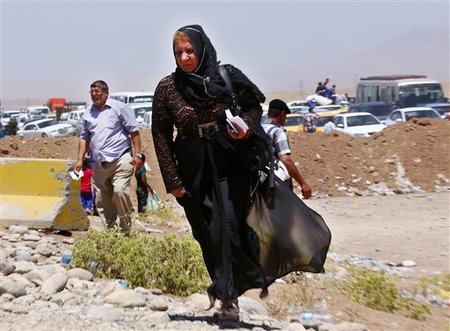 Aid workers are preparing for a potentially massive outflow of civilians from Mosul's Old City, the U.N. refugee agency's representative in Iraq said, raising fears for civilians being held as human shields.

Speaking to AFP in Arbil, the capital of Iraq's Kurdistan region, UNHCR representative Bruno Geddo said aid groups needed to be flexible as Iraqi forces battle to retake the last district of Mosul held by the Islamic State group.

"There is a number of civilians still trapped in the Old City, they are basically used as human shields. Nobody is sure how many they are but it could be anything around 100,000, maybe more," he said late on Tuesday.

"We expect that eventually the cork may pop somewhere and we will have a large-scale outflow from the Old City."

Iraqi forces launched the operation on Sunday to retake the Old City, after a months-long offensive to drive the jihadists from Mosul, Iraq's second city.

Commanders say the jihadists are putting up fierce resistance and there are fears for civilians trapped in the maze of narrow streets.

"I believe that this is a case of the largest urban warfare since World War II... so we have to be fast, to be flexible, to be ready to deal with the unpredictable," Geddo said.