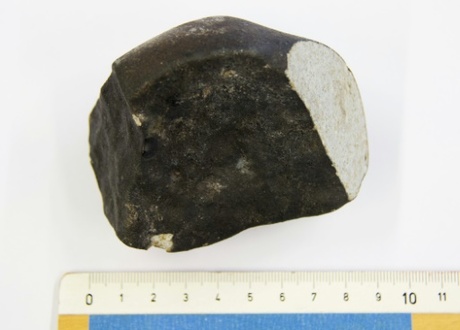 Dutch scientists on Monday celebrated the discovery of only the sixth meteorite found in recent history in The Netherlands, which at 4.5-billion years old may hold clues to the birth of our solar system.

"Meteorites are very special because we do not have rocks of this age on earth," said geologist Leo Kriegsman from the Naturalis biodiversity center in Leiden in a YouTube video marking the occasion.

The fist-sized meteorite, weighing about 500 grams (one pound), crashed through the roof of a shed in the small town of Broek in Waterland, just north of Amsterdam, in January probably traveling at the speed of a high-velocity train.

It was discovered the next morning by the residents, but despite an extensive search, no other fragments were found.

Even though meteor showers probably reach the northern European country every four years, the small space rocks are very hard to find. This is only the sixth meteorite found in the past 200 years in The Netherlands.

"We can learn from it what happened in the very beginning of the solar system when you had a stellar cloud that collapsed and minerals started to form, when planetoids started to form for the very first time," said Kriegsman.

"So it gives us information on what happened at the very beginning when the Earth was formed."

He estimated that the meteorite probably came from the region between Mars and Jupiter where there is a large asteroid belt with "a lot of rocks and small planets" flying around which sometimes fall out of their orbit.

The Leiden center was unveiling the meteorite on Monday, after carrying out extensive tests on it first.

"We wanted to be 100 percent sure of what kind of meteorite it was, so we needed to carry out some research first," Kriegsman told AFP.